Jamal in doubt for Tri-nation opener 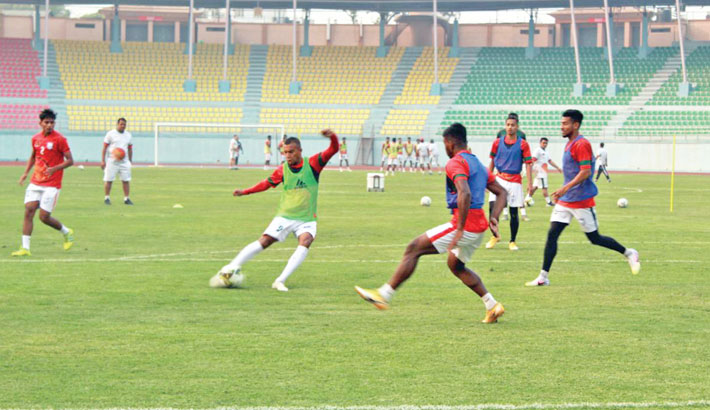 Bangladesh national football team head coach Jamie Day hinted that they might not get the service of their skipper Jamal Bhuyan in their opening match of the Tri-nation tournament today.

Bangladesh will take on Kyrgyzstan U-23s today in the tournament opener at Dasharath Rangasala Stadium in Kathmandu and Jamie informed that Jamal is likely to feature only in the second game against the hosts Nepal.

Jamal earlier joined the team in Nepal on Monday as he flew with Bangladesh Football Federation President Kazi Salahuddin.

“The decision on Jamal is still uncertain. He will only play one of the two games. Most probably the second,” Jamie told The Daily Sun, who earlier shared his plan about fielding two different playing XI in the tournament.

Bangladesh completed their preparation at Dasharath Stadium on the same day as the booters worked on game plans and set pieces.

“Jamal reached today (Monday) and joined the team in the training ground. There is no problem with his participation in the first game but I’m not sure if the coach will keep him in the first game,” he said.

Jamal had to join the team lately as he was playing for Kolkata Mohammedan Sporting Club in the ongoing I-League.  The midfielder returned to Dhaka last Friday and underwent the Covid-19 test on Saturday before joining the team in Nepal.

Jamie finalised 23 out of 24 players for the tournament on Monday. Only forward Md Jewel was dropped from the squad.

“He is a young lad whom we brought for the experience of training with the national team. We have other players and we want to look out now. But he will be one for later in the year if he keeps working hard and improving,” he said.

“I’m looking forward to seeing how some of the new players do. Like every game we play, we will try to win,” he added.

Midfielder Sohel Rana said, “Our target is to play the best to win the tournament. If we win the first match, we will play the final.”

Bangladesh will play their next match against hosts Nepal on March 27 at the same venue while the final will be held on March 29.