CHATTOGRAM: Although he is not a health worker, the brother of Whip Shamsul Haque Chowdhury administered vaccine doses to people at the unauthorised vaccination programme carried out at the behest of the whip at Shovandandi union in Patiya upazila. 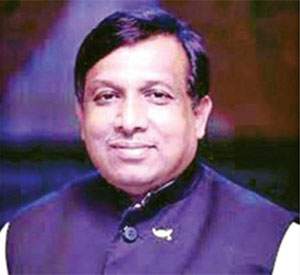 The participation of an unskilled common person in such a sensitive task of administering vaccine created resentment among many. Mohabbat was seen pushing vaccines in photographs taken during the programme, said sources. Some people also experienced pain and other symptoms after receiving vaccines from the untrained persons, they added.

Meanwhile, the committee formed to investigate the matter has prepared the report and was supposed to submit it to the divisional director of the Directorate General of Health Services (DGHS) on Monday night.

Committee chief Dr Ajoy Das, also a senior consultant of Chattogram General Hospital, said they recorded depositions of people concerned and interrogated many regarding the vaccination programme. “We almost prepared the report and hope to submit it tonight,” he told the Daily Sun on Monday evening.

The committee sources said they found the evidence of administering vaccine to some 2,600 people at the unauthorised vaccination programme without permission from the authorities concerned.

Some 6-7 staff and employees of the Upazila Health Complex, led by Rabiul, were involved in the illegal work. Registration of the vaccinated people was also not maintained properly, they said.

Recommendation was also made to take action against the persons responsible for the incident, said the sources.

Mentionable, Rabiul and some of his associates carried out the vaccination programme unlawfully at the behest of Whip Shamsul Haque at Shovandandi union under Patiya upazila on Friday, eight days prior to the scheduled date.

Some 2,600 people were vaccinated at Rashidabad Arfa Karim High School and Shovandandi School and College in exchange for money on Friday and Saturday, said sources.

The vaccination programme violating the government directive drew huge criticism and resentment among the vaccine seekers, who were waiting for long, said sources.

Rabiul, a follower of the whip, claimed that he received verbal consent from the lawmaker for the vaccination while the local upazila chairman and union parishad members were aware of it.

The DGHS formed a three-member committee and issued a show-cause notice on the medical technologist to explain the matter.

The committee visited Patiya Health Complex on Sunday and quizzed those related to the vaccination programme.

Upazila Health and Family Welfare Officer Dr Sabbyasachi Nath said there was no official permission for vaccination at any union right now.

Regarding the allegation of his presence at the vaccination centre, the officer said he visited the spot to verify whether vaccination was going on or not.

Despite having no three-year diploma course, he has been serving as medical technologist for being loyal to the whip.

There are also allegations of harassing other health assistants during distribution of the vaccine-related items and realising money for vaccine registration against Rabiul.

His wife is also working at Patiya Health Complex as health assistant.

Sources also alleged that there are a few other employees at the complex loyal to the whip.

Senior officials of the health department are reportedly helpless there due to their influence, they said.