Execution of verdict, how long? 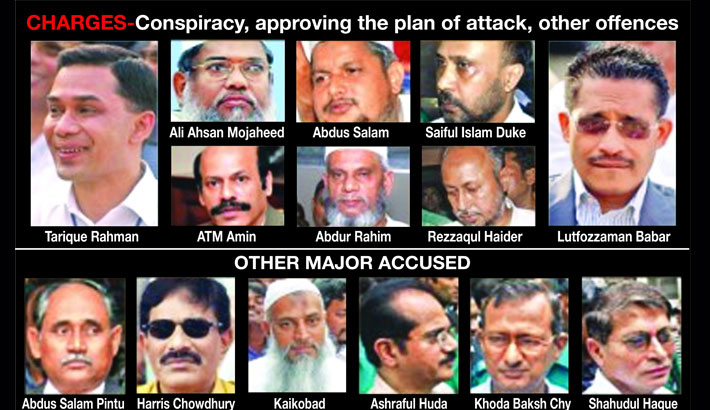 Families of the deceased and the wounded are waiting to see quick execution of the court verdict on the August 21 grenade attack on an Awami League rally although a court handed down punishment to 49 persons, including BNP acting chairman Tarique Rahman.

But, hearing on the death reference and appeals is yet to start in the two cases filed over the violent attack at Bangabandhu Avenue in the capital in 2004 that killed 24 people, including Ivy Rahman, and wounded over 500 others, including Prime Minister Sheikh Hasina.

In October last, a Dhaka speedy tribunal pronounced the verdict in the two cases, awarding death to 19 persons, including former state minister for home Lutfozzaman Babar, and life to 19 others, including Tarique Rahman who is now in self-exile in London.

The trial court also handed down different jail terms to 11 others, including former inspectors general of police Ashraful Huda and Shahudul Haque, in the cases.

With the verdict, wait of the victims’ families for justice came to an end more than 14 years after the horrendous incident, but now they are waiting to see execution of the verdicts.

Court sources said the Supreme Court authorities are working to prepare the paper-book over the death reference of the cases.

A paper-book contains all the details of a case, trial proceedings, verdicts, and other documents, including statements and evidence, and is necessary for the High Court to hear and dispose of a death reference or an appeal.

Once the paper-book is ready, the Chief Justice will send the death references and appeals to an HC bench for holding hearing on and disposing of the matter.

The sources also said the government wants early hearing on the death reference of the August 21 grenade attack cases on a priority basis to ensure punishment for all culprits involved in the grisly attack.

Attorney-General Mahbubey Alam said he would bring the matter to the notice of the apex court so that it would take special initiative to prepare the paper-book of the death references in the cases within a short time.

“Soon after completing the paper-book, we will take an initiative for holding hearing on the death references,” the chief law officer of the state said.

“BDR carnage cases got special consideration during the preparation of paper-book. We want the apex court will give special priority on preparing the paper-book of the August 21 grenade attack cases,” he added.

After completing the necessary formalities, the SC will print the paper-book of the death references and then send to an HC bench through the Chief Justice for hearing, SC officials said.

Earlier on January 13, the High Court accepted appeals filed by the convicts in two cases filed over August 21 grenade attack for hearing.

“The High Court after accepting the appeals for hearing, stayed the lower court order that fined the convicts and asked it to sent the case documents,” assistant attorney general Eusuf Mahmud Morshed told newsmen on that day.

The court also awarded different terms of jail to 11 others people, including two former inspectors general of police — Ashraful Huda and Shahudul Haque in the cases.

The judge also made 12-point observations on the background, motive and consequences of the attack, mainly targeting then opposition leader Sheikh Hasina.

Eighteen out of the 49 convicts are still on the run. Tarique Rahman, one of the prime accused, is hiding in London.

The government, however, is trying to bring back the fugitive convicts to the country and ensure their punishment, sources said.