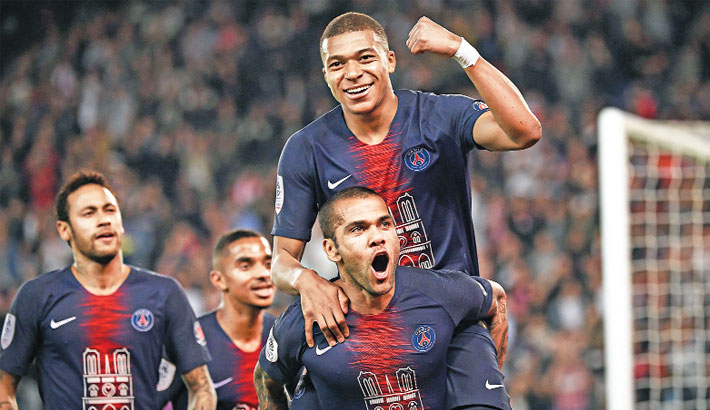 Kylian Mbappe scored a hat-trick and Neymar made his return from a three-month injury lay-off as Paris Saint-Germain began their Ligue 1 title celebrations with a 3-1 win over visitors Monaco on Sunday, reports Goal.

PSG were already confirmed as champions earlier in the day after second-placed Lille could only draw 0-0 with Toulouse, and Thomas Tuchel’s men subsequently played with freedom in an emphatic triumph inspired by Mbappe against his old club.

The lethal Mbappe took only 15 minutes to make his mark at the end of a stunning counter-attack and he doubled his tally just before half-time, rounding off another well-worked move.

Neymar – fit again after breaking his foot in January – came on at the interval to a huge cheer, before Mbappe completed his treble in the 55th minute to become the youngest player to score 30 goals in France’s top division.

Aleksandr Golovin’s late strike proved to be nothing more than a consolation for a Monaco side who still face the threat of relegation.

Monaco’s chances took an early blow when they lost goalkeeper Danijel Subasic to an apparent thigh strain, and PSG had the breakthrough soon after – Mbappe collecting Moussa Diaby’s pass and finishing into the top-left corner to round off a devastating break.

The former Monaco talisman missed a great chance in the 33rd minute, but he made amends a few moments later, playing a one-two with Dani Alves and neatly finding the bottom-right corner from just inside the area. PSG’s form suggested they may have been easing up as they failed to wrap up the title against Strasbourg, Lille and Nantes, losing to the latter two.

But they did not even have to kick a ball on Sunday to finally clinch a second successive Ligue 1 title, appearing more fluid and cohesive than they have in recent weeks.