Openers get Sri Lanka off to a strong start against Zimbabwe 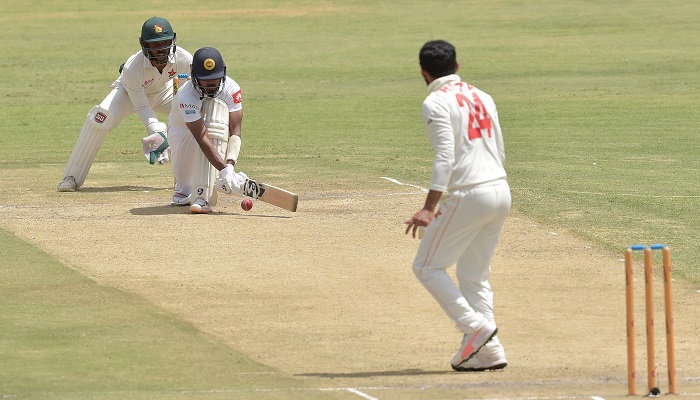 Sri Lanka's Oshada Fernando (C) plays a shot delivered by Zimbabwe's Sikandar Raza (R) as Zimbabwe's Regis Chakabva (L) looks on during the second day of the second Test cricket match between Zimbabwe and Sri Lanka at the Harare Sports Club in Harare on Tuesday. –AFP

Skipper Dimuth Karunaratne and his opening partner Oshada Fernando batted through the afternoon session without being separated to give the visitors a strong start in their reply to Zimbabwe's competitive total of 406.

Both batsmen were compact in defence and largely played the ball on merit. They ensured that the scoreboard kept rotating and this meant that the Zimbabwe bowlers couldn't settle in towards a particular batsman for longer periods.

The hosts were mostly defensive in their tactics, content to keep the runs down without really looking to exploit the deck which has had some help for the pacers and spinners alike, along with a bit of uneven bounce. Except Tinotenda Mutombodzi, who was costly in his brief spell, the others were mostly disciplined, not giving any free runs. Karunaratne and Fernando preferred to stay patient, waiting for the loose balls rather than enforcing themselves.

Sri Lanka have now won both the sessions on day two after having done well earlier in the morning to restrict Zimbabwe. However, the visitors know that their efforts will be undone if they don't have a solid final session. Zimbabwe will be hoping for the runs-on-the-board tactic to pay dividends with the track not that straightforward for the new batsman to bat on.