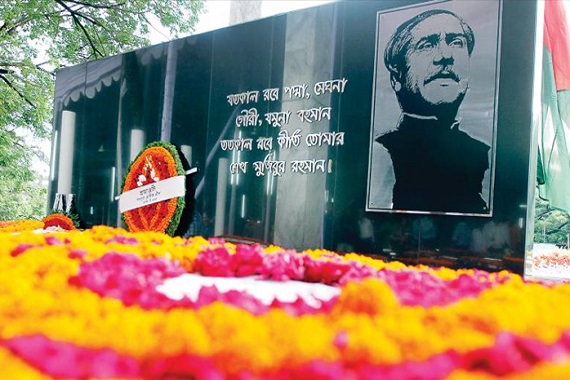 The nation is observing National Mourning Day on Tuesday with due solemnity, marking the 42nd anniversary of the martyrdom of Father of the Nation Bangabandhu Sheikh Mujibur Rahman, UNB reports.

A smartly turned out contingent of Bangladesh Armed Forces gave state salute at that time, while the bugle played the tune of grief and somber to the last post.

A munajat was offered seeking the eternal peace of the departed souls of the August 15 carnage.

Later, Sheikh Hasina, also the President of Awami League, flanked by party's General Secretary Obaidul Quader and senior leaders, placed wreaths at the portrait of Bangabandhu on behalf of the Awami League.

After paying the tributes to Bangabandhu, the Prime Minister along with her sister Sheikh Rehana visited the historic residence of Bangabandhu at Dhanmondi Road No. 32 which witnessed the world's most barbaric carnage on this day 42 years ago.

After their departure, people from all walks of life wearing black badges are paying homage to the Father of the Nation by placing wreaths at his portrait there.

The government and different socio-cultural, political and professional organisations, including ruling Awami League and its associate bodies, have chalked out elaborate programmes to pay homage to the architect of the country's independence.

The programmes include discussions, child-juvenile painting competitions, photographic exhibitions, milad mahfils and distribution of cooked food among the destitute.

Bangabandhu was assassinated along with most of his family members at the crack of dawn on August 15, 1975 by a cabal of unruly army personnel under a deep-rooted conspiracy against the country and its independence.

His two daughters -- Sheikh Hasina, now the Prime Minister, and Sheikh Rehana -- survived the barbaric carnage as they were abroad at that time.

Bangabandhu's Military Secretary Col Jamil was also killed. Some members of a family at Mohammadpur in the capital were killed by artillery shells fired by the killers on the same day.

The national flag is also kept half-mast at Bangabandhu Bhaban in the capital and Awami League offices across the country at dawn.

Doa and milad mahfils will be held at all mosques after Zohr prayers and special prayers will be arranged in temples, pagodas, churches and other worship places at convenient time across the country.

Food will also be distributed among orphans and destitute people at noon.

A milad mahfil will be held at the Darbar Hall of Bangabhaban after Zohr prayers on the occasion.

Mohila Awami League will arrange a milad mahfil at Bangabandhu Bhaban in the city after Asr prayers. Prime Minister Sheikh Hasina will participate in the programme.

Besides, Awami League will arrange a discussion at the city's Bangabandhu International Conference Centre at 4:00 pm on Wednesday where Awami League President Sheikh Hasina will be present as the chief guest.

State-run Bangladesh Betar and Bangladesh Television as well as private television channels and radio stations will air special programmes highlighting the life, struggle and achievements of the great leader. Newspapers will bring out supplements on the occasion.