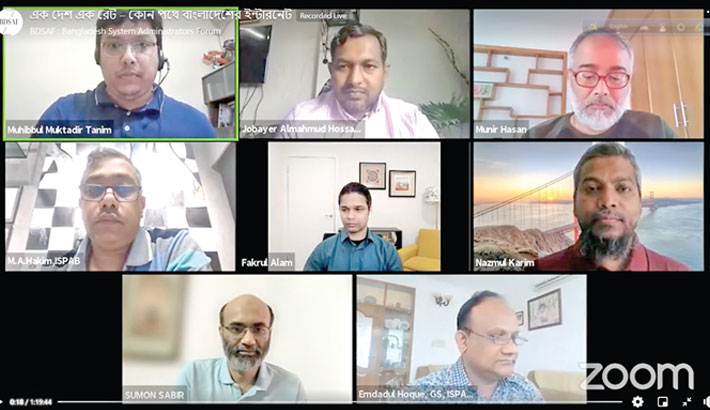 Internet Service Providers (ISPs) feared a possible slowdown of internet speed for video-focused platforms if the cache server hosting is replaced from the local resellers.

Addressing a webinar on Friday, the country’s tech experts urged the government to reconsider the countrywide flat rate for broadband internet providers before introducing a prudent policy.

A cache server is a dedicated network server or service acting as a server that saves web pages or other Internet content locally.   In Bangladesh, ISPs hosts the cache server of Facebook, Google and Netflix mainly to serve internet in better speed.

A cache server both speeds up access to data and reduces demand on an enterprise's bandwidth by placing previously requested information in temporary.

Bangladesh System Administrator Forum (BDSAF) organized the meeting virtually to review the present situation of internet after implementing the flat rate as well as possible challenges if the cache server is shifted from ISPs.

BdOSN general secretary Munir Hasan said the government should update the broadband policy before implementing the countrywide fixed internet at the same price.

“In rural areas, the ISPs depend on cache server to provide high speed Internet as most of the users surf the Facebook and Google platforms,” he said.

He added, “If the cache server shifts from ISPs, its may create negative impact on internet speed. And it’s very relevant to implement the flat rate.”

ISPAB general secretary Emdadul Haque claimed the decision of cache server transfer has created a confusing situation in the industry as the country needs transmission of 24 terabyte bandwidth to serve the customers if the proposal being implemented.

“Bangladesh will miss around 50 percent of its Internet traffic if the cache server will shift after one month,” he said.

“On other hand, the marginalized businesses will count extra expense,” he said urging to formulate guidelines for the ISPs for the sake of the economy.

According to the BTRC, Bangladesh has 9.81 million broadband connections as of May this year.