No booze, no autographs as Tokyo 2020 sets fan rules 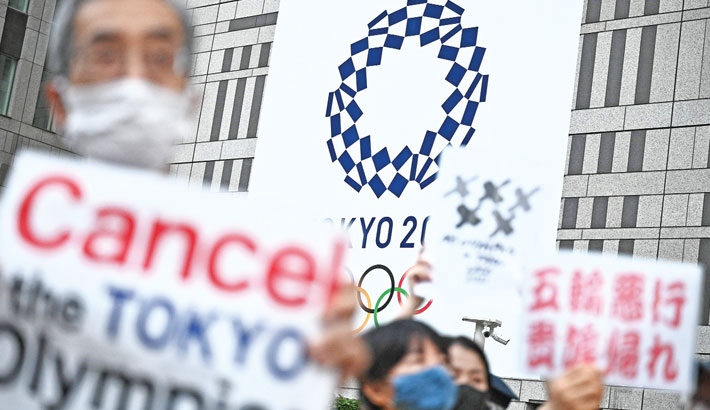 A group of anti-Olympic activists takes part in a protest outside the metropolitan government building to mark the 30 days before the Olympic Games opening ceremonies in Tokyo on Wednesday. – AFP photo

No alcohol, no hugs, no cheers and no autographs: Tokyo Olympic organisers unveiled tough new rules for spectators at the pandemic Games on Wednesday as they marked one month until the opening ceremony.

Tokyo 2020 president Seiko Hashimoto warned festivities "will have to be suppressed" to keep the Games safe, and conceded that organisers will need to be "creative" to stoke a party atmosphere.

Games chiefs decided on Monday to allow up to 10,000 spectators into competition venues, but Hashimoto warned them not to expect the kind of festival mood currently being enjoyed by football fans at Euro 2020.

"In Europe, the venues are filled with celebration," she said. "Unfortunately, we may not be able to do the same."

Fans are forbidden from cheering or "making direct contact with other spectators" and will be asked to go straight home after events end.

Asking athletes for autographs or "expressing verbal support" is also a no-no, as is waving a towel or "any form of cheering that could create a crowd".

Spectators will also have to do without alcohol, even though it is allowed at other sporting events currently being held in Japan. The late decision on the spectator cap has given organisers a ticketing headache only a month before the opening ceremony.

Over 3.6 million Olympic tickets are already in fans' hands, but organisers have been forced to set up a lottery to claw back around 900,000 of them for events that exceed the cap. No more tickets will be sold.

Athletes are also already in town, and offering organisers a taste of the challenges ahead.

A Ugandan Olympic coach tested positive on arrival in Japan on Sunday, despite the delegation having been vaccinated and testing negative on arrival.

Domestic opposition to the Games has softened in recent weeks, but around half of Japan's public still don't want the event to open in four weeks' time, polls show.

Around 200 people gathered on Wednesday evening in Tokyo to protest the Games, calling for it to be cancelled.