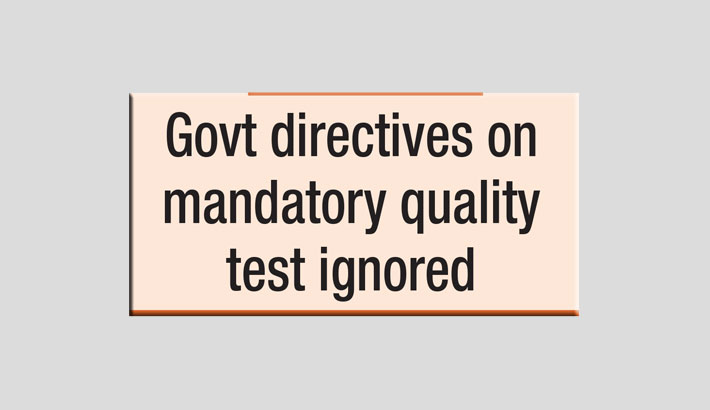 There is no bitumen company in the United Arab Emirates (UAE). But a ship loaded with Iranian bitumen, labelled as UAE product, was tactically offloaded from Chattogram Port.

An investigation shows that the bitumen has come from Iran which is facing an international trade ban. The label was changed in UAE’s Sharjah Port.

Then the bitumen was sent to Chattogram Port by another ship and the product was released.

It has been learnt that the bitumen-laden ship was seeking ways for anchorage at the jetty of the Chattogram Port. But the authorities concerned seized the ship following an order of the High Court.

Later two importer companies managed to take the seized ship under their possession. The concerned authorities were astonished by the incident.

Chattogram Port secretary Omar Faruk said: “We don’t know how the seized ship has gone to the depot of the importers.”

However, a government circular strictly prohibits the release of any imported goods without following the standard procedures.

It has been learnt that the Chinese ship – Guangzhou One – sailed off to Chattogram from Hamriah port near Sharjah in UAE on May 9. The ship contained 11,220 tonnes of bitumen for two Bangladeshi companies.

Some 6,773 tons are for the Bay Terminal and Distribution Company Limited, a sister concern of PHP Group.

And the remaining bitumen was for MEB Group. It has been learnt that the ship arrived at Chattogram port within 11 days on May 20. From then a media investigation group kept surveillance over the ship. The ship tried to anchor in the Dolphin jetty of the port.

In a recent circular, the government directed the customs authority that any imported bitumen cannot be released without a quality test certificate from respective authorities. However, the two companies did not follow the directive, according to the investigation.

Meanwhile, the Mercantile Marine Department of the government seized the ship following a direction of the High Court on June 9.

Sources said the ship was waiting at the outer anchorage on Sunday. However, it moved directly to the depot of the respective importer companies.

Customs Commissioner Mohammad Fakhrul Alam said he is aware of the government’s directive on quality testing of products before releasing from the port.

“However, I don’t know about the release of the product from the ship without any testing. Assistant Commissioner at the Jetty can clarify the issue,” he said.

Contacted, Assistant Commissioner Tofaiyel Ahmed said: “There are many ships on the port. I can’t say anything without seeing the BL. It’s better to talk after going through the documents.”

According to the source, the ship Guangzhou One carries bitumen on a regular basis. The bitumen shipped through two UAE agencies. The agency – United Futuristic Trade Implex uploaded the products for Bay Terminal and Verasco Fze packaged the products for MEB Group.

The agencies provide packaging services to international companies. They (the agencies) package the products in bulk or drum based on the demand of the clients. No company can import bitumen from Iran directly. To avoid the regulation, the bitumen was distributed via ports in the UAE.

The PHP Group’s Bay Terminal reported the price of 4,272 tonnes of imported bitumen at $1.78 million. According to the invoice, the price of each tonne of bitumen stands at $420. Besides, the importers also labelled the UAE as the origin of the product and the grade of the bitumen product is 60-70 grade.

However, a diplomatic source in UAE informed that UAE doesn’t produce bitumen. And there is no workshop of bitumen in the UAE. The bitumen becomes refine in UAE after entering from Iran.

The refined bitumen is exported to different countries in the Indian subcontinent including Bangladesh. All the bitumen product came from UAE to Bangladesh is manufactured by Iran which grade is 80-100. And the price is a maximum $240 per tonne.

However, PHP Group did over-invoicing and reported the price to be $420 per tonne and the standard of bitumen as 60-70 grade. The company also laundered money through the over-invoicing.

After the media report, the Commerce Ministry recently took initiatives to amend the regulations of Import Policy. In the new directive, imports of all kind of residues of petroleum oil except petroleum coke and petroleum bitumen are banned in Bangladesh. And the imported product should be examined by BSTI, BUET and Eastern Refinery.

Concerned officials said the importer companies tried to ignore the directives of the High Court by bypassing the standard procedures. However, the seized product reached the depot of importers finally, defying the government’s ban and the latest directives on bitumen import.