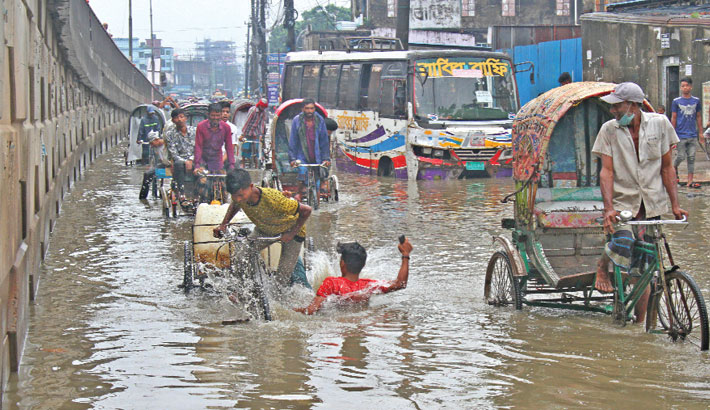 A passenger of a rickshaw-van falls on the waterlogged road as the three-wheeler hit a pothole in Bahaddarhat area of Chattogram city on Saturday. The busy road went under knee-deep water after rain, causing immense sufferings for commuters. – Rabin chowdhury

CHATTOGRAM: Residents of low-lying areas of the port city experienced untold sufferings due to waterlogging caused by incessant rainfall on Saturday morning.

Sources said the rain that started on Friday morning continued heavily till Saturday afternoon with some breaks.

People, mainly the office goers and garment workers, were the worst sufferers as movement of traffic was hampered at some thoroughfares during the time.

Met Office in the city's Patenga area recorded some 127mm rainfall in 24 hours on Saturday.

Forecasting Officer and Meteorologist Md Forid Ahmed of the Met Office also forecasted moderate to heavy rainfall over most of the places and heavy to very heavy rainfall at some places in 24 hours till 6:00pm today.

He also forecasted that due to the rainfall landslides may occur at places in the hilly regions of Chattogram.

Water entered residences, business and commercial establishments in the areas.

Medication services at Chattogram Maa-Shishu O General Hospital were hampered to a great extent as water logged on the ground floor since the morning.

Patients were seen staying at the hospital and receiving treatment amid the logged-water. Business activities at wholesale markets including Chaktai and Khatunganj were disrupted due to the inclement weather.

Loading and unloading of the bulk cargoes at the Chattogram port and its Outer Anchorage were also hampered due to the heavy rainfall.

Mentionable, Chattogram Development Authority (CDA) in cooperation with the Bangladesh Army, started works of the mega project taken for addressing the waterlogging crisis in the port city on April 28 in 2018.

Over 50 per cent works of the project involving Tk 5,616 crore have already been completed, said sources.

The implementing authority created temporary obstructions at some canals for cleaning them and setting sluice gates worsening the waterlogging situation further.

However, decision has already been taken to remove the obstruction by June.