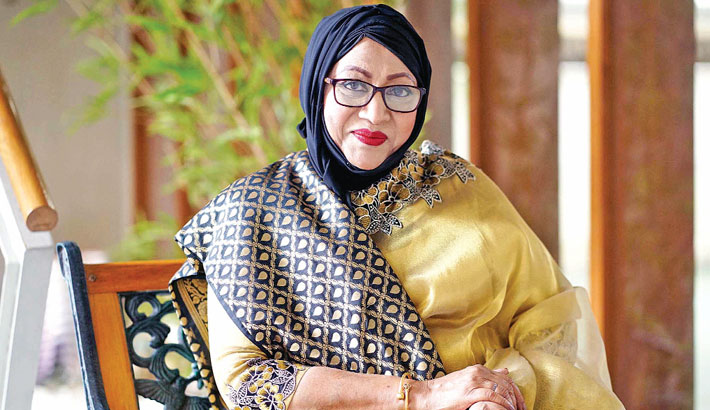 Veteran actress Kohinoor Akhter Shuchanda, who has won the hearts of millions with her fabulous acting style, has completed 55 years of her acting career. In 1966, the artiste first stood in front of camera for the film ‘Kagojer Nouka’ directed by Subhash Dutta.

Talking about her long journey in the film industry, Shuchanda said, “I’m grateful to my audience because audience’s love is the great achievement of my career. Thanks the directors and artistes in our time who have presented many wonderful movies though we faced various limitations. In this time, many young directors are making good films and the future of the film industry is depending on these filmmakers. I urged the young makers to make good quality films by using modern technology to save our film industry.”

Kohinoor Akhter, known as Shuchanda, is a popular film actress and director of the country. She started her career in the mid 1960s.  She won Bangladesh National Film Award for Best Director for the film ‘Hajar Bachhor Dhore’ in 2005 and Bangladesh National Film Award for Lifetime Achievement in 2019.   Shuchanda also won Nigar Award from Pakistan in 1987 for her role in the film ‘Hum Ek Hain’.

As a first Bangladeshi actress she won an international award at Moscow Film Festival in 1972 for her role in the film ‘Jibon Theke Neya’ directed by Zahir Raihan.

In 1985, Shuchanda debuted as a film producer and produced the films ‘Teen Kanya’, ‘Taka Ana Pai’ and ‘Protishodh’ from her production house ‘Suchanda Cholochitra’.

Shuchanda debuted as a director with the film ‘Bidesh Jatra’ in 1998.