PM urges youths to be self-reliant thru fish farming 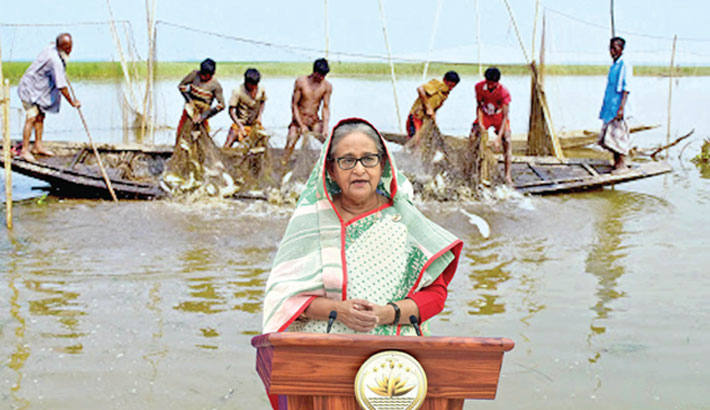 Prime Minister Sheikh Hasina on Saturday urged the youths to engage themselves in self-employment activities availing of the government facilities to be financially self-reliant and make a prosperous and developed country.

“Huge employments have been generated in the fisheries sector for various measures taken by the government. The youths can create self-employments by establishing fisheries farms and thus make them financially solvent instead of running after jobs,” she said.

In a video message screened at a programme of the Awami Matshyajibi League marking its 18th founding anniversary, the premier also said that the country will move towards prosperity keeping its head high in the world arena with the ideology through which Father of the Nation Bangabandhu Sheikh Mujibur Rahman made Bangladesh independent, reports BSS.

She said that her government has taken various measures such as imparting the youth folk with required trainings, creating various scopes for them, excavating waterbodies and preserving those and taking measures for increasing fish production to ensure nutrition alongside food security.

Noting that her government has been establishing 100 economic zones across the country in which they are giving importance to building food processing industries that are creating scopes for marketing of the local goods.

The government has made special allocation for the fishermen alongside giving food and rice free of cost and arranging alternative jobs so that they do not fall in hardship financially, she said.

The government has also created scopes for getting collateral-free loans from the banks in agriculture sector that included the fisheries mainly to increase food production.

Sheikh Hasina, also president of the ruling Awami League, said the fish production has reached around 50 lakh tonnes from 27 lakh tonnes while Bangladesh has secured first position in producing hilsha fish due to the measures taken by the government.

Describing fish as a safe source of nutrition, the premier said that her government has so far ensured 62 gram of fish against the demand of 60 grams for a person every day.

She said that the people are currently not suffering from nutrition as the government has ensured food security alongside nutrition.

She, however, stressed the need for taking nutrition-rich foods, such as fish, vegetables and fruits alongside rice.

The Prime Minister called upon the concerned leaders and activists to strengthen the Awami Matshyajibi League.