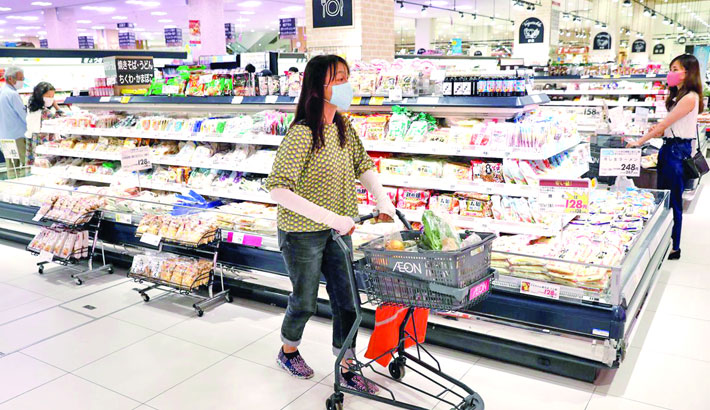 Separate data showed firms facing rising input costs and a slower expansion in factory activity in May, highlighting risks to an economy heavily reliant on the manufacturing sector, report agencies.

The data underscores the challenge policymakers face in combating a resurgence in Covid-19 infections without hobbling an economy already lagging other major trading partners emerging from the pandemic-induced slump.

“Inflation fell in April but that was almost entirely due to a plunge in mobile phone tariffs,” said Tom Learmouth, Japan economist at Capital Economics.

“Looking past temporary distortions, we think underlying inflation will continue to rise a bit further, though unlike in some other advanced economies.”

The core consumer price index (CPI), which excludes the effect of volatile fresh food costs, fell 0.1 per cent in April from a year earlier, smaller than a median market forecast for a 0.2 per cent drop, government data showed on Friday and in line with March’s decline.

A record 26.5 per cent in cellphone charges knocked 0.5 per cent off core CPI, the data showed, as carriers heeded Prime Minister Yoshihide Suga’s calls to ease the burden on households.

By contrast, energy prices rose 0.7 per cent in April, marking the first gain since January 2020 due to recent rises in crude oil costs and the base effect of last year’s slump.

Any decline in manufacturers’ profits would be a huge risk to firms’ capital expenditure plans and leave the economy without a driver as the country wrestles with the hit to consumption, analysts say.

Japan’s economy shrank in the first quarter and analysts expect any rebound in April-June to be modest as new Covid-19 infections forced the government to re-introduce state of emergency curbs, hurting already weak consumption.