Tigers on the brink of series loss 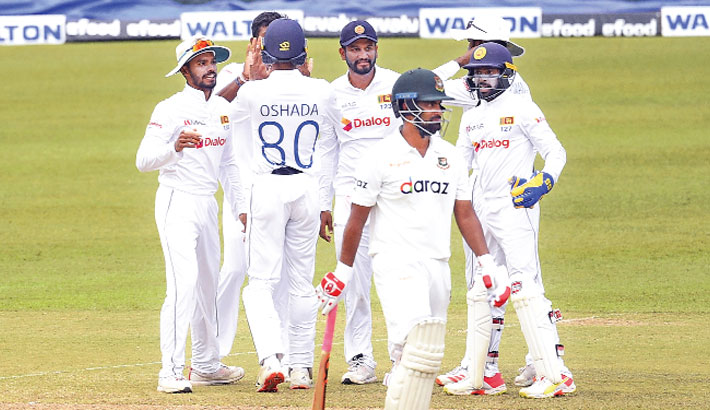 Bangladesh found them on the verge of a series defeat against hosts Sri Lanka after losing half of their side in the second innings on the fourth day while chasing a mammoth target in the second Test in Kandy on Saturday.

Bangladesh finished the day on 177-5 as they require 260 runs to win the second Test on the final day which looks very unrealistic in the current circumstances at Pallekele International Cricket Stadium wicket which produced help for the spinners from the third day.

Sri Lanka earlier declared their second innings on 194-9 just after the lunch break to set Bangladesh a stiff target of 433 runs after resuming on 17-2.

Bangladesh lost in-form Tamim Iqbal (24) early in the chase as he was edged to the wicketkeeper Niroshan Dickwella off Ramesh Mendis in the eighth over of their innings.

Saif Hassan and Najmul Hossain played some exciting shots before both were removed by debutant Praveen Jayawickrama after scoring 34 and 26 runs respectively.

Bangladesh could have suffered another wicket when Mehidy was given out for a catch at short leg but he survived the call after taking a review which confirmed that the ball neither touched the bat or the gloves.

Liton Das and Mehidy were not out on 14 and four runs respectively before bad light forced another early stumps in the match that forced the game into the fifth day.

“Our two batsmen are still batting at the crease. Our plan will be batting as long as possible. If we can bat well in the first session then we can think of doing something in the Test,” Najmul said after the end of the fourth day’s play.

Despite losing wickets at regular intervals, Sri Lankan batsmen earlier kept ticking the score-sheet at a good pace and went to lunch break on 172-6, adding 155 runs in 32 in the morning session on day four.

Bangladesh bowlers took three wickets within 4.2 overs of the second session, forcing Sri Lanka to declare their second innings after taking a lead of 436 runs.

Sri Lankan skipper Dimuth Karunaratne top-scored again with 66 runs, taking his run-tally to 428 runs in the series, most by any skipper against Bangladesh in a Test series.

Bangladesh were bowled out for 251 runs in their first innings on day three, replying to Sri Lanka’s first innings total of 493-7d. Sri Lanka decided against follow-on Bangladesh and went in to bat in the second innings.