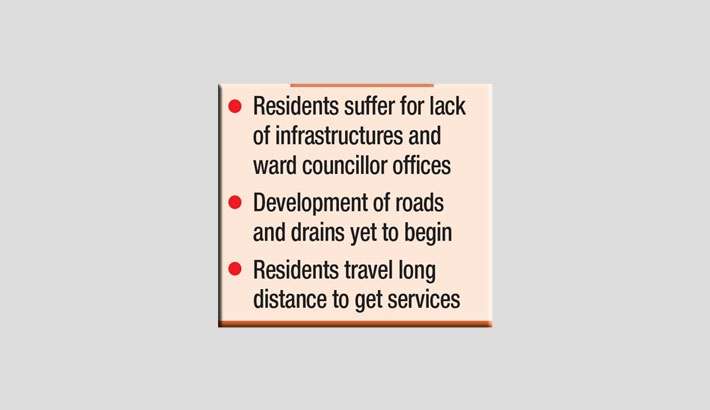 The residents of newly establish 36 wards under the two city corporations of Dhaka continue to suffer due to inadequate civic facilities and lack of access to basic services from their councillors and zonal offices.

The city dwellers are also exposed to multifaceted hurdles in their daily life due to dumping of waste materials haphazardly, inadequate roads and drainage systems, lack of community centres and street LED lights in the 36 wards.

They said the councillor offices lack manpower and support staff, causing serious difficulties for the residents to get 17 types of certificates, including birth and death, inheritance, income and mutation of land.

They have to visit zone offices in old wards to get services like trade license and certification for different purposes, they also said.

Sufia Khatun, a resident of ward 66 under DSCC, said, “We don’t have proper road and drainage systems. We are deprived of waste management and lighting services but now City Corporation is imposing taxes on us.”

Md Khokon, a resident of ward 38 of DNCC, said, “Neither the City Corporation nor the former Union Parishad is providing us civic services. No development work has been undertaken in this area since the merge with the city Corporation.”

“Our sufferings have increased after being a part of DNCC. Because DNCC is yet to provide us holding number and we cannot submit tax certificates,” he also said.

DNCC ward 38 Councilor Sheikh Selim said they are operating from a rented house and that they don’t have any staff to carry out official work.

“Residents of my area have to go Karwanbazar for a birth certificate and other relevant services of City Corporation because we have no zonal office.  I have appointed a personal secretary for carrying out some works like which can be done from his office,” he said.

Selim also said services like waste management and improvement of roads and drainage is absent since the inclusion of the ward to DNCC from Union Parishad.

Residents under his ward alleged that they have been facing difficulties in getting utility services like electricity connection because they have to show tax certificate and holding number, which DNCC is yet to provide.

Though DSCC conducted some development work of roads-drains and installing LED lights in four new unions, residents brought similar allegation while talking to the correspondent.

DSCC ward 75 councillor Akbar Hossain made similar allegations of having no major development works in his ward.

“An office and a ward secretary are much needed for carrying out clerical jobs and provide services to the residents. We have raised the issue in our monthly meetings regularly but with no results.”

Talking to this correspondent, officials of the Dhaka South City Corporations (DSCC) and Dhaka North City Corporation (DNCC) said they are desperately trying to recruit adequate manpower to provide necessary services to the residents of new wards.

Officials said they are waiting for the approval from the concerned ministry to appoint required manpower and establish offices. Besides, major development plans are being delayed to bureaucratic tangle.

“It’s very unfortunate that we could not appoint any secretary in the offices of newly established wards for providing basic services to the residents. We have discussed the issue of recruiting manpower with Local Government Ministry to resolve the problems,” DNCC Mayor Atiqul Islam said.

He informed that they got approval for a project of Tk 40.25 billion to build basic infrastructures like road and drainage in 2020 but they could not start the construction works. “The authorities are moving towards a major infrastructure development programme and thus the implementation of the previous plan is being delayed,” he said.

He, however, is hopeful to start the implementation of all the infrastructure development plans in a bigger way and under the megacity development plan of the government.

Panel Mayor of DSCC, Shahid Ullah told the Daily Sun that they have been working for the establishment of councillor and zonal offices and recruiting manpower including secretary for the ward councillor offices in the newly established wards.

“It is a time-consuming task. We have recruited some mosquito control workers for the wards. We can start the process after three months but it has to be done phase by phase,” Shahid Ullah also said.