Dreams come true for the homeless

Around 70,000 people get houses today as PM’s gift 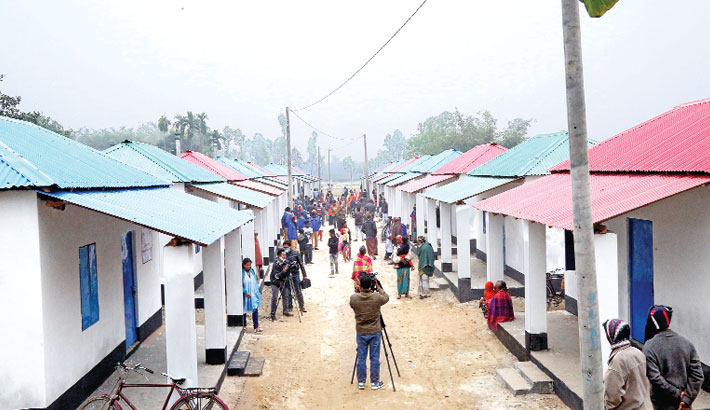 Houses, meant for distribution among the homeless, are now ready and will be hand over to them today. The photo was taken from Soyar Union in Taraganj upazila of Rangpur district. – SUN PHOTO

Jabbar Mia, a homeless beggar who has been living here and there in Rangpur’s Taraganj upazila for more than fifty years with his wife Dakhilon Begum, is waiting to receive his best ever gift, ‘a permanent residence’, from Prime Minister Sheikh Hasina.

He is more than happy to get a piece of land with home on his own at this stage of life. Jabbar Mia reminisces about his past life with a hope of joy in coming days.

“I have spent my whole life by begging from people. I have lived here and there in a makeshift tiny house. I never have dreamt of a home of mine which is now reality. It is more than a dream to me,” Jabbar Mia shared his story with this correspondent who is going to receive a home from the government under Ashrayan Project-2 on Saturday.

Like Jabbar and Dakhilon, a total of 1,273 families in eight upazilas of Rangpur are now waiting to receive a home of their own.

The figure is quite bigger in the context of entire country where around 70,000 hapless families are going to get homes of their own on Saturday.

As part of the noble initiative taken by Prime Minister Sheikh Hasina to rehabilitate all the homeless and destitute by the Mujib Barsho, some 69,904 destitute families across the country will receive their permanent houses from the prime minister under the Ashrayan-2 project.

The premier will inaugurate the distribution of the houses virtually from her official residence Ganabhaban at 10:30am on the day.

It is a unique example in the world that Sheikh Hasina’s government is going to rehabilitate a huge number of landless and homeless families at a time with housing facilities.

Visiting several projects in Rangpur district, it was seen that a kind of festive mood has been prevailing among the homeless and destitute people, who are going to receive a home of their own which they never thought of.

It is really a great festival for them, said Ilias Hossain-Luky Akter couple as they are going to get a semi-building home at Soyar union in Taraganj upazila of Rangpur.

Recalling their back life, the couple said that they had no land of their own. Even Ilias’s father had no land. They had lived their life at others house by hand to mouth.

Stories of their lives are almost same. All of them are waiting for celebration on such occasion.

Sources said as part of the government’s commitment that every homeless will get home during the Mujib Barsho marking the birth centenary of Father of the Nation Bangabandhu Sheikh Mujibur Rahman, the houses are being provided for the poor people.