Tigers at bottom in Test ranking 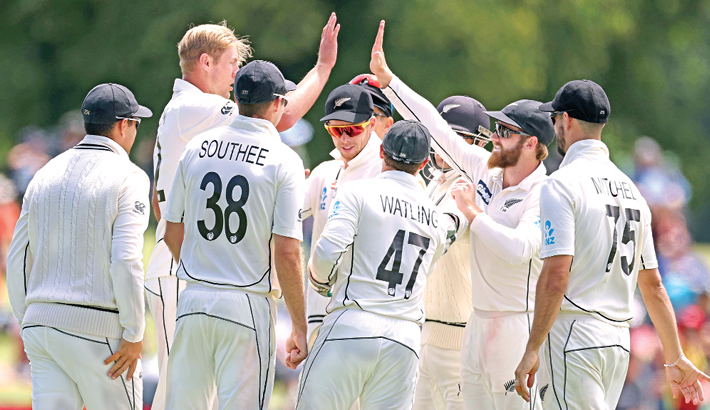 Captain Kane Williamson had no trouble Wednesday pinpointing the moment that laid the foundation for New Zealand to become the world's number one ranked Test cricket team for the first time.

The Black Caps were confirmed in the top spot after a comprehensive victory over Pakistan by an innings and 176 runs in the second Test in Christchurch to sweep the two-Test series.

It meant New Zealand have won six consecutive Tests for the first time, extending their unbeaten home run to 17 and keeping alive their hopes of reaching the World Test Championship final in June.

Bangladesh are placed in bottom among the 10-team Test ranking with 55 rating points.

It is a far cry from eight years ago, when New Zealand's cricket reputation was in tatters after they were rolled for 45 in the first innings against South Africa in Cape Town.

Current Black Caps BJ Watling and Trent Boult, who also played in that innings, made nought and one respectively.

From that embarrassment came the realisation that things had to change, starting with the culture within the team.

The days of cliques and senior players ignoring younger squad members are over and, as one former Black Cap told AFP, stars are no longer faking injury to avoid training sessions. "Under Brendon and Hess there were some drastic changes in terms of the culture and that started things off," Williamson said of then captain Brendon McCullum and coach Mike Hesson.

Williamson said that development has continued through to the current squad and the captain highlighted the emergence of Kyle Jamieson, who took a man-of-the-match 11 wickets, and Daryl Mitchell, who scored his maiden Test century in the Christchurch Test.

"When you see some of the younger guys come in, like Daryl Mitchell and Kyle Jamieson, especially in this game, there were some outstanding contributions, but it's more the attitude they brought that is most satisfying."