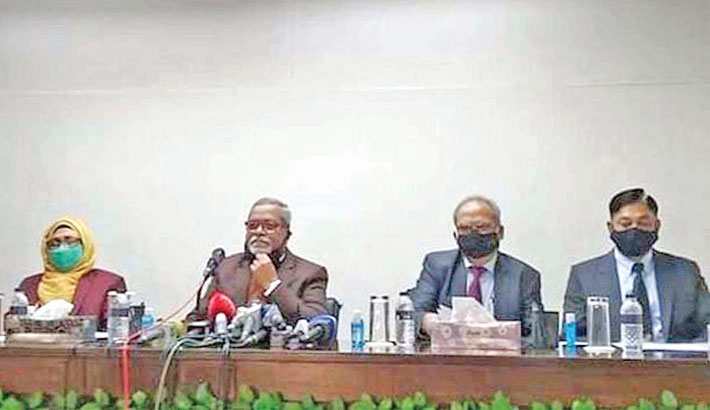 CEC KM Nurul Huda speaks at a press conference at the EC headquarters in the capital on Thursday. —SUN photo

At a press conference at the election commission building on Thursday, he said, “There might be confusion in the minds of the people. So this press conference is intended to clarify our position. The statement blaming the EC is unwelcome and unacceptable.”

The CEC, however, did not receive any question outside the written statement. Election commissioners Rafiqul Islam, Kabita Khanam and Shahadat Hossain and commission secretary Mohammad Alamgir was present at the press conference. Election Commissioner Mahbub Talukdar, however, was not present.

At the outset of his written statement, CEC Nurul Huda said they had heard that 42 citizens had made an appeal to the president recently for action to be taken by the Supreme Judicial Council against the EC on various allegations.

This has led to confusion in the public’s mind and so the commission needs to make its stand clear.

He said, “Tk 20 million had not been allocated for training in the action plan for the 11th parliamentary election and the upazila polls. And so, the allegations of misappropriation of Tk 20 million are baseless and motivated.”

The CEC claimed that there had been no corruption in the appointment of staff and in the procurement and use of EVM (electronic voting machine).

He also turned down other accusations of misconduct and irregularities brought by the 42 citizens.

The CEC said that foreign observers had observed the 2018 national elections. The observation agencies had made no such allegations.

He said that the elections were closely contested. The voter turnout was 60 to 80 per cent, with 2 to 8 candidates for each seat. So it is baseless to say that people had lost faith in elections, Nurul Huda added.