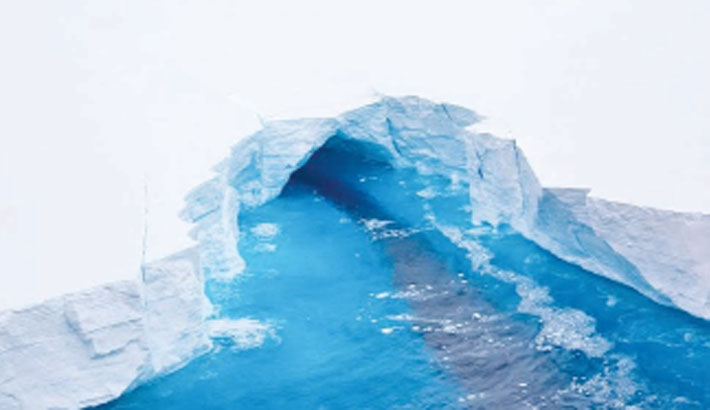 An aircraft of Royal Air Force of Britain has obtained images of the world’s biggest iceberg as it drifts through the South Atlantic, reports BBC.

The A400m transporter flew low over the 4,200-sq-km block, known as A68a, to observe its increasingly ragged state.

The pictures reveal multiple cracks and fissures, innumerable icy chunks that have fallen off, and what appear to be tunnels extending under the waterline. The Antarctic berg is currently bearing down on the British Overseas Territory of South Georgia.

A68a is now just 200km from the island and there is a real possibility it could become stuck in shallow coastal waters.

The British Forces South Atlantic Island (BFSAI) reconnaissance flight was sent out to assess the situation.

“Guided by satellite tracking, the A400M can get under the weather and closer to the iceberg, enabling more detailed observations,” Squadron Leader Michael Wilkinson, Officer Commanding 1312 Flt, said in a BFSAI Facebook posting.

“I know I speak on behalf of all of the crew involved when I say this is certainly a unique and unforgettable task to be involved in.”

Relentless wave action is breaking off countless small fragments, so-called “bergy bits” and “growlers”. But some of the pieces being calved are significant objects in their own right and will need tracking because of the additional hazard they will now pose to shipping.