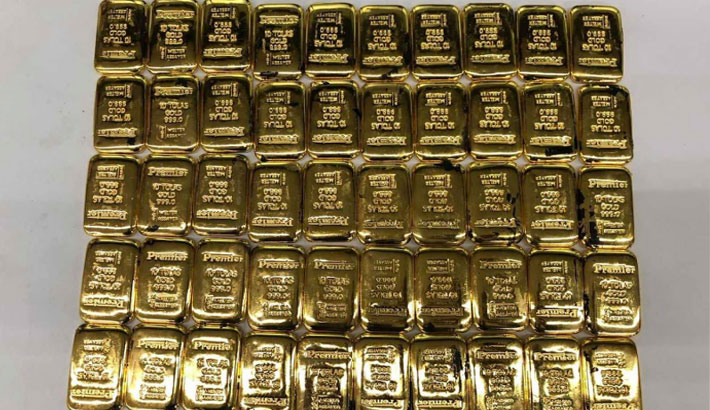 CHATTOGRAM: The quantity of gold bars being brought through legal channel has increased significantly after the resumption of the international flights through Chattogram Shah Amanat International Airport since September this year.

Operations of international flights through the airport remained suspended from April to August due to the corona pandemic.

The expatriates are now bringing gold bars in good quantity, especially from Dubai by the national flag carrier Biman Bangladesh Airlines and others.

Sources at the Airport Customs said passengers from Dubai brought 645 pieces of gold bar weighing around 75 kilograms by paying a duty amount of around Tk 1.30 crore on Thursday.

The revenue earned in a single day for bringing gold is the highest in the history of the airport, they said.

Concerned sources said passengers brought 5,168 pieces of gold bar weighing around 604 Kg from November 1 to November 20 through the airport by paying a customs duty of around Tk 10.36 crore.

Against the gold bars brought legally, the customs officials seized only 50 pieces of gold bar brought illegally during the period of November 1 to November 20.

The passengers brought 8,321 pieces of gold bars and ornaments weighing around 970 kg by paying customs duty of Tk 19.64 crore from September to November 20 this year.

But, the quantity of the gold bar stood at only 283 pieces weighing 33.164 kg in the corresponding period of last year (September to November). However, the legally brought gold bar was only 347 pieces from January to March this year.

The customs authority seized only 361 pieces of gold bar and ornament weighing 35.58 kg brought without declaration after resuming the flight operation since September.

The price of per Bhori 22-carat gold was Tk 76,000 in the Bangladeshi market on Friday.

Customs official said that Chattogram Shah Amanat International Airport is now at top position among other airports of the country in terms of earning revenue from gold bars this year. According to the baggage rules, an adult passenger can bring highest 100 gram of gold ornament with no charge while maximum of two gold bars by paying duty of Tk 20,062 per piece is allowed.

He observed that high price in the local market, duty reduction and strict surveillance by the concerned agencies are behind the increase in the transportation of the gold bars through the legal channel.

Sources preferring not to be named suspected that Chattogram might have been used as a transit for the gold bars which are actually going to neighbouring countries in exchange of firearms, drugs and other illegal goods.

Mithun Dhar, the owner of Priyotoma Jewellers of city’s EPZ area, said they are experiencing poor sale due to the corona pandemic.

Chattogram Jewelers Owners Association President Mrinal Kanti Dhar told the Daily Sun that the government should reduce the duty for bringing gold from abroad to ensure legal trading in the country. It will help the government earn more revenues while jewellers will be able to buy legal gold with proper documents, he said. “However, there is no impact of the recent flow of gold in Chattogram,” he said, adding that the trade volume is not satisfactory in Chattogram market for the corona pandemic and high price of the gold.

In many cases, customs officials arrest the carriers after seizing the gold bars at the airport while the kingpins or persons behind the smuggling remain traceless.

The cases filed of illegal gold recovery are investigated by the Criminal Investigation Department (CID).

Contacted, CID, Chattogram Special Superintendent Shanewaj Khaled said they are yet to reveal the destination of the gold and investigation was going on in this regard.

“Bringing of huge gold amid the crisis moment is suspicious,” he said.

'It is sure that Chattogram is being used as a transit route for smuggling the gold bars. The gold is sent to Dhaka and Feni to reach its final destination," said the Rab CO.

“We will launch an investigation to see whether the gold is being smuggled to neighbouring countries in exchange of firearms, drugs and other illegal products,” he added.

Mentionable, the government reduced 20 per cent duty on bringing gold for the 2020-21 FY.