Mubinul Azim: An avant-garde artist of the country 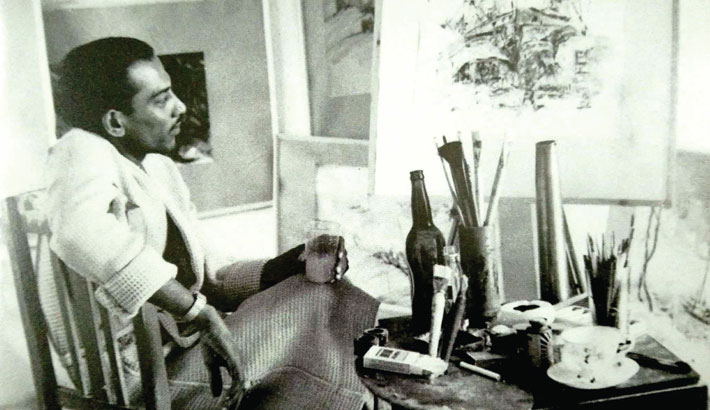 A unanimous assessment is that mid-20th century art can be categorised into two separate movements. One can be called conceptual, which is typified by works of art that deal with socially and politically engaging issues. The other foremost concept of the century’s art is pure abstractionism in its diverse styles. Mubinul Azim’s work represents the latter one. His paintings feature various scribble lines and shapes. He had freedom to identify himself with his working styles that are apparently synchronised and technically phenomenal. He used to strive to proceed with a certain style that eventually became a personal hallmark of his works.

Mubinul Azim is considered a pioneer in the Bangladeshi art scene. He and his fellow contemporaries had a great contribution in experimental paintings. Some of them combined local motifs and various western forms.

Azim’s lines signify the modern mode of expression. A number of his paintings feature varied structures, ovals, encircled forms. It is believed that Azim constructs a form or composition and then he deconstructs it, only to recreate it. Well-drawn shapes, sharply outlined, and meticulously created textures make most of his images memorable. His images also ardently capture fragmented visions inspired by expressionism. The artist did many paintings where forms of disintegration were highlighted. His works also highlight a combination of contemporary abstract shapes and multi-coloured forms. The artist has used forms and lines derived from his whimsical visions.

Since the ‘50s and ‘60s, Bangladeshi painters have incorporated a diverse range of familiar, unfamiliar forms and motifs in their works. Though the contemporary art history of Bangladesh does not have long innings, it flourished here within a relatively short period. This was made possible by some painters who studied in the west in the '50s and '60s. Upon their return, the influence of renowned western artists was evi dent in their works. At that time, some artists took the oppurtunity to refine their skills and establish individual hallmarks. This period was significant for other reasons as well: these painters introduced many forms of modern, abstract, abstract-impressionist and abstract-expressionist art. Their works had an enriching influence on other emerging painters as well.

Azim died on November 1 in 1975, when he was at the peak of his artistic career. He produced many paintings, watercolours and sketches in the course of his short career span. He graduated in fine arts from Bangladesh College of Arts and Crafts (at present Faculty of Fine Arts, Dhaka University) in 1955. A hardworking and reflective introvert, Azim spent a significant part of his career in Karachi - a hub for artists, poets, writers and novelists at the time. Besides immersing himself in painting, Azim taught at an art institute in Karachi. However, he always kept in touch with his contemporaries in Dhaka.

Azim returned to Dhaka for good after the Liberation War and devoted himself to painting. He held a solo exhibition in 1973 at Desh Art Gallery in the city. After his death, two exhibitions of his works were held at Dhaka Club (in 1976) and Shilpakala Academy (in 1998).

Azim set out as a naturist and figurative painter. In the early stages of his career, nature played a major role in his works. Along with natural elements, colour was a predominant aspect of his works. The treatment of colour and particularly the composition was distinct and exceptional.

Azim was a socially aware painter. In 1952, he was involved in the Language Movement. At that time, he was a second year student at the Bangladesh College of Arts and Crafts (at present Faculty of Fine arts, University of Dhaka). He had organised a meeting in protest of firing on the rally on February 21. He produced many posters and paintings on the Language Movement in that period.

Today Azim's paintings, with their unique lucid qualities, have lost none of their appeal. His canvases are marked with pigment and fluidity. He always used a limited number of elements in his canvas. A good interaction between use of space and objects always carried an individual and aesthetic trademark in his works. Sometimes his works seem to convey the feel of solitude.

During a certain phase of his career, Azim focused on boats. He drew forms of boats that resembled the impression of a new moon or crescent. He strived to maintain a good balance between colour and forms. The interplay of darkness and light was another significant characteristic of his works.

Azim continued his quest for novel and fresh elements in his paintings. He took to using oil paints in a style reminiscent of action painting - quite akin to the works of Jackson Pollock. Azim was brilliant in designs and texture. His compositions assumed an expressionistic look as red, blue and other bold colours began dominating his canvas.

Azim was hardworking and devoted to his art, which explains his profound productivity in a short career span. With his demise, the country lost a great painter. The saving grace is that many proud collectors are carefully preserving his works.