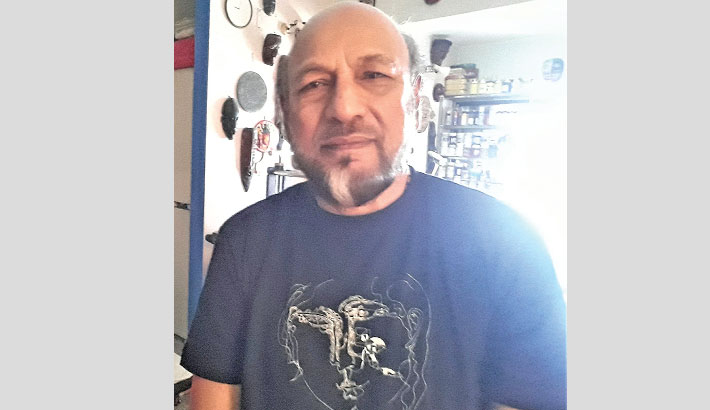 Kalidas Karmakar is one of the most successful, noble, contemporary dynamic personalities among the few artists of Bangladesh who have displayed their artistic talents in the seventies which is called "The embodiment of Alluvial Bengali Art". This talented artist is equally famous for his observational work. Abstract paintings has been created in a domestic and sometimes international outline in his canvas.

I have been acquainted with the person Kalidas Karmakar or "Kali Da" since 2016. Kali'da is such a talented person, full of youthful vigor - he is the first one to me. I have had the absolute privilege of recognizing and getting to know him from a very close distance, walking the streets and alleys of Kolkata.

"Art, the elements of art abound around us, we just have to find out." A dry leaf, tiles, clay, broken and discarded thing that can be a tool of art, especially to reach the place of feeling, knowing, understanding, enjoyment of the common man. If I do not walk 2 feet with this man, something would have gone out to know again.

When a child draws a picture, we can find something soft flowness, a peace of mind is going somewhere.  And in the case of an artist, one should relax oneself for sometime, its needed to give chance to take oxygen in mind, so that our thought can take a chance to breathe in free-fresh air.

Even after spending a lot of time in abroad towards the end of his life, his love for his motherland, the bond of his soul in his work, thoughts and expression through his works of art that we find. His solo exhibition, titled "Alluvial Souls, Soil and Symbols" bears that testimony. He has shaped the soil in a unique and different way where entry of general public is free to enter there.

Art always speaks above religion, society, caste and any other differences. Through his exhibitions - he always wanted to break the fences of religion. Let them clear and know their unknown places of works who are very clay-minded people, the little ones - who are just growing up, learning to understand by seeing his exhibitions. In this world, everyone has equal rights of practicing art. It is not wrong to practice art, it is wrong to deceive people, to take away human rights and it is wrong to take away one's mouth food. I find such examples in the solo exhibitions of his work. From corruption to social inequalities, everything was highlighted in his work - where everyone was free to roam.

He always dreamed to bring the culture of Bengal, the tradition of rural Bengal, and their hardships before everyone. He stopped when he suddenly came to a crossroads on Park Street in Kolkata. He took out his mobile phone from his pants pocket and took a video for some time. He sat down on the side of the road, then said, "Hey, why did you stop? Play ... I'm listening. You get paid whatever you want ..."

Yes, there was a flutist in front of him. The flutist was playing the flute to the tune in his mind and selling the flute. Kali'da collected the flute player's phone number, by saying he would contact him later. But that work remained incomplete today.

The artist and person is Kali'da, whose work and clothing is dominated by the use of color is "red color". Red acts as a shining symbol of infinite, boundless energy, starting from the artististic thoughts and the use of color in the work. I wanted to know about the reason at any Poush fair in Santiniketan. What is the reason for this?

He replied, "There is no such special reason for love or affection. As the path goes on such love is created, my love for red is the same. There seems to be a huge energy of fresh youth like your generation in this red. And so am I. I want to be young like your generation as long as I live. "

During his lifetime, artist Kalidas Karmakar had 72 solo exhibitions in Bangladesh and abroad. In recognition of his contribution to fine arts, he was awarded various domestic and international awards, including the Ekushey Padak and the Shilpakala Padak of Bangladesh.

Although he is absent in physically, he is alive by work. He passed away 18th October in 2019.

The writer is a MFA student of Rabindra Bharati University in Kolkata, India.