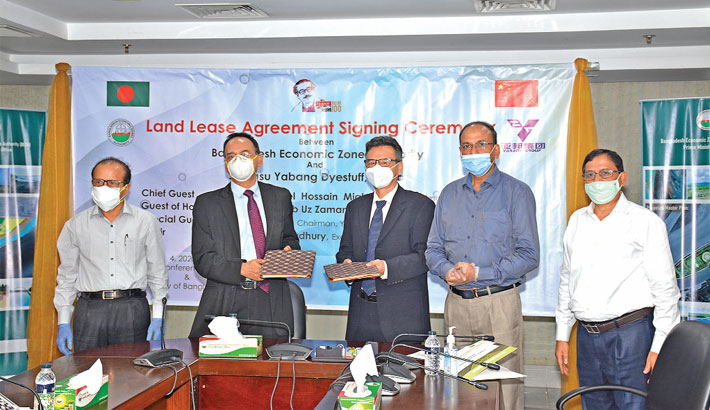 Jiangsu Yabang Dyestuff, a concern of Chinese Yabang Investment Holdings Group Co Ltd, will invest $300 million in setting up textile and other chemical industries in Bangladesh.

The industries will be set up on 100 acres of land at Bangabandhu Sheikh Mujib Shilpa Nagar (BSMSN) at Mirsarai, Sitakundu and Sonagazi upazilas under Chattogram and Feni districts.

This would create employment opportunities for about 2,200 people, said a press release on Tuesday.

The annual export of the group will be around $146.40 million and annual domestic sale is likely to be $97.60 million.

Yabang Group Chairman Xu Xiaochu joined the function online as the special guest while Bangladesh Ambassador to China Mahbub Uz Zaman joined it as the guest of honour.

In his speech, Tofazzel Hossain Miah said, “The government under the leadership of Prime Minister Sheikh Hasina is committed to providing all sorts of support to the Foreign Direct Investment (FDI) and good investment friendly incentive compared with the other neighbouring countries.”

Paban Chowdhury said the ongoing global trade situation is favourable for Bangladesh and that is why the Chinese businesses are keen to invest in the country.

The investment of Yabang Group will help Bangladesh diversify its export basket as well as ensure technology transfer, he added.

Yabang group has submitted conceptual master plan along with implementation plan in support of infrastructure development of the project.

They have also submitted ‘Environment Management Plan’ to address environmental issues of the project and three years audited balance sheet of the sponsor company certified by them and as per balance sheet, the sponsor company have sufficient fund as “Surplus Reserve” and “Undistributed Profits” to cover equity contribution of the proposed project.

The Yabang Group is one of the leading companies in the chemical sector with present operating income exceeding 32 billion RMB ($4.5 billion) in China.