The most beloved one 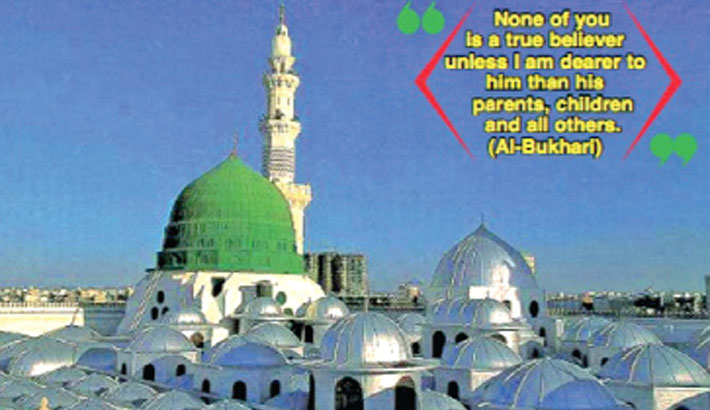 Muslims often talk about their love of Prophet Muhammad (peace be upon him). In their ordinary speech, many refer to him as ‘our beloved one’, rather than mention him by name. Others use different titles and adjectives, always indicating how greatly they value, respect and love him. When people of other religions realise this, they often express shock or surprise. They wonder why should we feel such love for someone who died some 1,400 years ago. We all remember how the publication of the Danish cartoons insulting the Prophet stirred a worldwide reaction among Muslims. This was extremely surprising to people in the West. Yet such love is to us the mark of true faith. We do not really believe in Islam unless we love the Prophet more than anyone else.

Such love is a requirement of the Islamic faith. It must be genuine love, not a merely verbal statement. The Prophet is quoted by Anas as saying:

“None of you is a true believer unless I am dearer to him than his parents, children and all others.” (Related by Ahmad, Al-Bukhari, Muslim, Al-Nassaie and Ibn Majah). Uttered by anyone other than Prophet Muhammad, such a statement may be ill-considered or misunderstood. From him, however, it must be treated as part of the education he gave his followers. He was no seeker of any position in this world. He looked for nothing that people could give. He aspired to no status other than the one given to him by Almighty Allah. He was the Messenger of Allah, The Exalted, and his role was to deliver His message and educate people in how to accept it and conduct their lives on its basis. The statement quoted above should be viewed in this light. What it tells us is that when something is contrary to what the Prophet says or orders, we must never hesitate between the two; we must always take what the Prophet says abandoning anything that differs with it.

We clearly see this in the following Hadith, which associates loving the Prophet with loving Allah, The Merciful. It is again a highly authentic Hadith in which Anas quotes the Prophet as saying: “There are three qualities which are certain to give anyone the sweetness of faith: to love Allah, The Glorious, and His Messenger more than anyone else, to love a person for no purpose other than for the sake of Allah, The Benevolent, and to hate to relapse into disbelief after Allah, The Forgiver, has saved him from it as much as to hate to be cast in the fire.” (Related by Al-Bukhari, Muslim and Al-Nassaie).

In this Hadith loving the Prophet is seen as part of loving Allah, The All-Powerful. This is not surprising because it was through the Prophet that we learned who Allah is, His attributes, our position in relation to Him, what concept to formulate of Him and what Allah wants from us. Thus, as Allah’s Messenger, Muhammad (peace be upon him) has given us everything we need to know about Allah, delivered His message and guided us through practical example along the way that is certain to earn for us Almighty Allah’s acceptance and to ensure that in the life to come we will be in ultimate bliss. He has taught us every good thing we need to know in our life.

When someone does us a good turn, we feel grateful. If the good turn is bound to spare us exposure to some detriment, we feel heartily touched. If it brings us some happy feeling, we are ever so excited. Muhammad (peace be upon him) did us the best turn anyone can ever have, presenting to us divine guidance at its purest and most complete. He has spared us the worst calamity that can ever befall anyone, which is incurring Allah’s anger and punishment. He has given us the faith that is bound to fill us with the happiest feelings mankind can experience in this life. If we realise all this, how can we fail to love him more than we love ourselves?

Abdullah ibn Hisham, a companion of the Prophet, reports: “We were with the Prophet (peace be upon him) and he held Umar ibn Al-Khattab’s hand. Umar said to him: ‘Messenger of Allah! I love you more than anyone and anything else, apart from myself.’ The Prophet said to him: ‘By Him who holds my soul in His hand, this will not do, unless you love me more than you love yourself.’ Umar said: ‘Well, now you are indeed dearer to me than my own self.’ The Prophet said: ‘Now, Umar, you have got it right.’” (Related by Al-Bukahri).

It is important to realise that Umar’s words were genuine. He did not say words simply to please his interlocutor, who in this case was the Prophet himself. He was expressing his feelings in a direct manner. At first, Umar thought that no one can ever love anyone else better than his own self. Hence, his first statement. The Prophet explained to him the fact that every Muslim should know. Nothing could take precedence ahead of the Prophet in any Muslim’s feelings, not even one’s person or interests. These should be sacrificed when set against what the Prophet requires.

The love these Hadiths speak of is not a mere feeling. It must be supported by the right action. Otherwise, the Prophet would not have accepted Umar’s last statement until it was put to test.