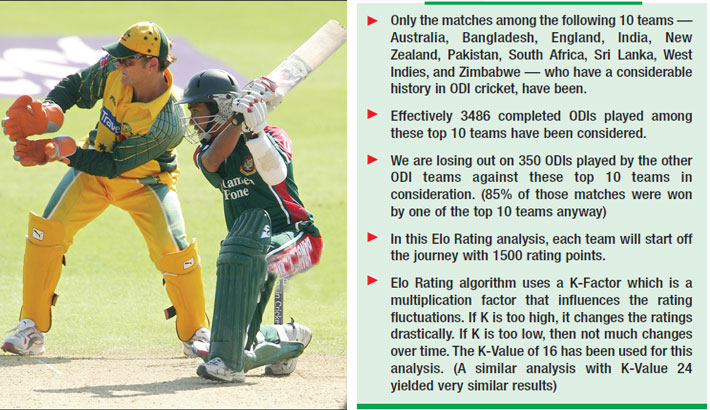 Bangladesh’s win against Australia is the biggest upset in cricket history, according to ELO ratings published recently.

Arpad Elo, a Hungarian-American physics professor, devised a method for calculating the relative skill levels of players in zero-sum games and the method was used to rate ODI cricket teams using a rating system invented by Elo to rate chess players.

The Elo rating system has been successfully applied to other team sports in the past, in the beginning; all players have an average rating. The winning player takes some points from the losing player and this updated rating is used to determine the probability of winning for the next game. For the rest of the article, a player is going to be an international cricket team.

On June 18, 2005, Sophia Gardens Cricket Ground at Cardiff, Bangladesh got their first-ever win against the mighty Australian that is said to be the biggest upset in cricket history.

Bangladesh batsman Mohammad Ashraful played the key role behind the memorable win as he not only scored his maiden ODI ton to seal the victory for the Tigers and left cricket nation shocked.

It is statistically proven that the match between Bangladesh and Australia has created a world history but if someone follows the early 2000’s then you would know that the five-time world champion Australia was at their highest rating and had the best team at that time.

The all-star team where was a player like Adam Gilchrist, Mathew Hayden, Damien Martyn, Michael Clark, Michael Hussey, Jason Gilespie, Glenn Mcgrath and the captain Ricky Ponting was facing one of the lower-tier, yet promising team Bangladesh.

Ricky Ponting won the toss and elected to bat first. Young Mashrafe Mortaza was in the bowling run-up, facing him there was one of the best wicket-keeper batsmen in history Adam Gilchrist. Mashrafe shocked the Sophia Gardens crowd when he had Adam Gilchrist plumb on the second ball. Taking the first Australian wicket without a run on the scoreboard.  In the sixth over Ricky Ponting padded up to Tapash Baisya - resulting in an lbw decision given, and Australia were - incredibly - 9 for 2.

They survived through 15 overs. In the 16th, Hayden got bowled by Nazmul Hossain for 37 off an inside edge. Some economical bowling from Mohammad Rafique who bowled ten overs for 31 runs, along with excellent bowling from Mortaza at the death, resulted in Australia finishing on 249 for 5. Where Martyn and Clark get the scoreboard running with their half-ton 77 and 54. In fact, Michael Hussey with 31 not out off 21 balls and Simon Katich with 36 not out off 23 ensured that they got a competitive target.

Everyone thought it was an easy match for Aussies as they had the best bowling lineup with pacers like Mcgrath and Gillespie, in spin there were Hogg, Clark and Hussey.

Also, the start of the second innings was on Australia’s favour. As they had early wickets of Nafees Iqbal, Tushar Imran and Javed Omars but the match then slipped out of Aussies hand and boomeranged to Bangladeshi tigers hand as the young finest batsman of Bangladesh team Mohammad Ashraful started to smash Australian bowler for boundaries and made the scoreboard running towards the target.

A table got turned for Ponting’s team when Ashraful got a 130 run partnership with then tiger skipper Habibul Bashar. Bashar got out for 47 from 72. But Ashraful got his maiden ODI ton with just playing 100 balls and 11 boundaries.

At the 47th over Ashraful got caught out from Gillespies delivery but the hard hitter Aftab Ahmed seal the deal for Bangladesh in the last over he swung the first ball of Gillespie over to midwicket for six. Bangladesh won with four balls and five wickets to spare. With this Bangladesh made their name into history.

“In the first game, I got out to a good ball. The wicket was better for batting in the second game,” said Ashraful adding that he was under pressure to perform.

“In the Test match I didn’t score that much, and then I scored a duck in the first one-day match. It was pressure for me because in this team I have to score. But I haven’t been scoring that much. I can’t express it in words about that feeling,” he concluded.