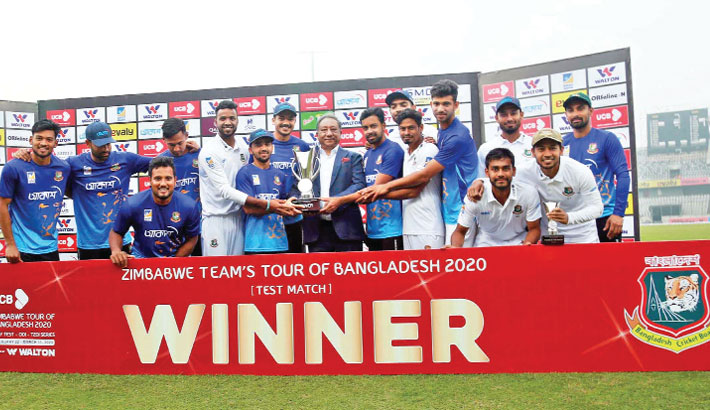 BCB president Nazmul Hasan Papon and Bangladesh Test skipper Mominul Haque hold the trophy along with the teammates after winning the one-off Test against Zimbabwe at the Sher-e-Bangla National Cricket Stadium in the capital on Tuesday. Bangladesh won by an innings and 106 runs. — BCB Photo

Bangladesh Test skipper Mominul Haque said on Tuesday that their win against Zimbabwe will make them more confident when they take on Pakistan during their upcoming fixture in April. “Winning a match always rises up the faith in the team. So I think this winning will help us in the Pakistan Test match as well,” he said.

Bangladesh broke away from their losing jinx after earning six defeats on the trot as they earned a massive win against Zimbabwe by humbling them by an innings and 106 runs in their one-off Test series at home, that also mark the first win for Mominul Haque as the team leader.

“I don’t know if you see me under pressure. But I don’t feel under pressure throughout the match or before the match. Start can be unfruitful sometimes but if stick to that I can’t do anything. I have failed as captain in first Test matches but I’m trying to learn from my mistakes and looking forward to the upcoming days,” Mominul told reporters, who earned innings defeats in the previous three Test matches where he led the side.

Mominul added that they are moving in the right direction to do well abroad as they opted for sporting wickets against Zimbabwe going against their traditional rank turner.

In the Test match though off-spinner Nayeem Hasan was outstanding but it was breath of fresh air to see their two pacers operating from two ends unlike before when they opted to play only one pace bowler.

“I want to play good cricket in home and away both. So what I have to do is to play pace bowler as much as I want. If they don’t bowl regularly they will not understand how to bowl in away condition. That is the reason the pitch might have been ready for this match. We were being ready for this challenge,” said Mominul adding that he is expecting the same kind of wicket in the domestic tournament.

“I think that in National League or BCL (Bangladesh Cricket League) match, the pitches are going to be the same as we played in Test.

“You can see from the last New Zealand series Rahi (Abu Jayed) and Ebadat are playing almost 7 or 8 test matches regularly. So, what I think is they should play and gain experience and we are going through that planning Inshallah in future they will get better because I think the mindset is very important to play in a way condition. The 80-90% cricket depends on mindset,” he said.

Mominul added that it is too early to make comment on off-spinner Nayeem Hasan who repaid the faith of the team management by displaying a brilliant brand of spin bowling.

“Nayeem (Nayeem Hasan) just started his career so I don’t want to talk about it so much. Mashallah I think to be bowled very well. But he needs more improvement as his career just starts,” he said.

“Nayeem is a good bowler but doesn’t think of Miraz is now bowling badly. Nayeem just got an opportunity that’s all I think,” he said adding that though Zimbabwean attack is relatively new they will grow in time.

“You all know the difference between bowlers from Pakistan, India and Zimbabwe. They have a difference in skill and in planning which I don’t see disrespectfully. They also bowled well. But they didn’t have experienced bowler, because their two pace bowlers were injured. The bowler they had played few tests but when they will have the experience they will become good bowler,” he concluded.