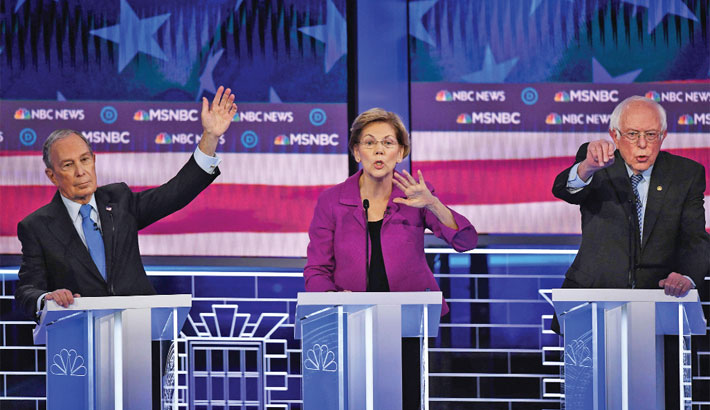 Bloomberg, the former New York mayor who was once a Republican, was forced to defend his record and past comments related to race, gender and his personal wealth in an occasionally rocky debate stage debut. Sanders, meanwhile, tried to beat back pointed questions about his embrace of democratic socialism and his health following a heart attack last year.

The ninth debate of this cycle featured the most aggressive sustained period of infighting in the Democrats’ yearlong search for a presidential nominee. The tension reflected growing anxiety among candidates and party leaders that the nomination fight could yield a candidate who will struggle to build a winning coalition in November to beat Trump.

The campaign is about to quickly intensify. Nevada votes on Saturday and South Carolina follows on February 29. More than a dozen states host Super Tuesday contests in less than two weeks with about one-third of the delegates needed to win the nomination at stake.

Massachusetts Sen. Elizabeth Warren was in a fight for survival and stood out with repeated attacks on Bloomberg. She sought to undermine him with core Democratic voters who are uncomfortable with his vast wealth, his offensive remarks about policing of minorities and demeaning comments about women, including those who worked at his company.

Sanders lashed out at Bloomberg’s policing policies as New York City mayor that he said targeted “African-American and Latinos in an outrageous way.” And former Vice President Joe Biden charged that Bloomberg’s “stop-and-frisk” policy ended up “throwing 5 million black men up against the wall.”

Watching during his Western campaign swing, Trump joined the Bloomberg pile on. “Mini Mike Bloomberg’s debate performance tonight was perhaps the worst in the history of debates, and there have been some really bad ones,” Trump tweeted. “He was stumbling, bumbling and grossly incompetent. If this doesn’t knock him out of the race, nothing will. Not so easy to do what I did!”

After the debate, Warren told reporters: “I have no doubt that Michael Bloomberg is reaching in his pocket right now, and spending another hundred million dollars to try to erase every American’s memory about what happened on the debate stage.”