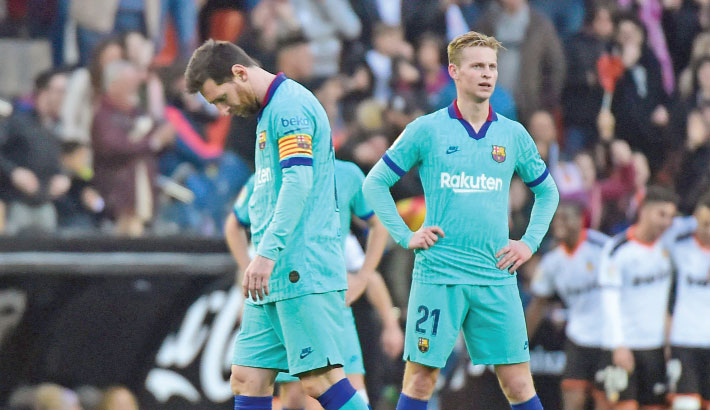 Quique Setien’s honeymoon period lasted less than a fortnight as Messi’s Barcelona tasted first defeat with their possession oriented new coach on Saturday in his second La Liga game in charge after a 2-0 loss to Valencia.

A Jordi Alba own goal and Maxi Gomez’s strike at Mestalla raised early doubts about Setien’s appointment and gave Real Madrid the chance to move three points clear at the top of the table when they visit Real Valladolid on Sunday.Sevilla jumped into third, above Atletico Madrid and five points behind the top two, after they beat Granada 2-0.

Barcelona had most of the ball but Valencia had the best chances as Gomez missed a penalty and also hit the crossbar in the first half. Gabriel Paulista saw a third goal ruled out late on.

While performances under previous coach Ernesto Valverde were stodgy and familiar failings went unresolved, he left a side in first place.

Setien promised a new style but few will cheer a team that loses. Despite dominating possession, Barcelona did little with it and as Valencia grew in confidence, they ceded control too.

“There are things they have not understood or maybe we have not have explained ourselves well,” Setien said afterwards. “In the first half, quite frankly, we were bad.”

The question is whether Setien is trying to impose too much too soon and perhaps whether this group are even well-suited his ideas.

Valencia climb to fifth and continue to improve under Albert Celades. This success came without their captain Dani Parejo and, largely, without star striker Rodrigo Moreno.

For Valencia the plan was to sit and absorb from the beginning of the game and it worked, with Barcelona unable to cut through or create a single clear chance.

And when Valencia did intervene, they were more dangerous too. With their first attack they won a penalty as Jose Gaya slipped past Gerard Pique and would surely have scored from eight yards before being brought down.

Pique was booked and, with Parejo absent, Gomez stepped up, only for his driven shot to be well saved by Marc-Andre ter Stegen, albeit with the help of half a yard’s headstart off his line.