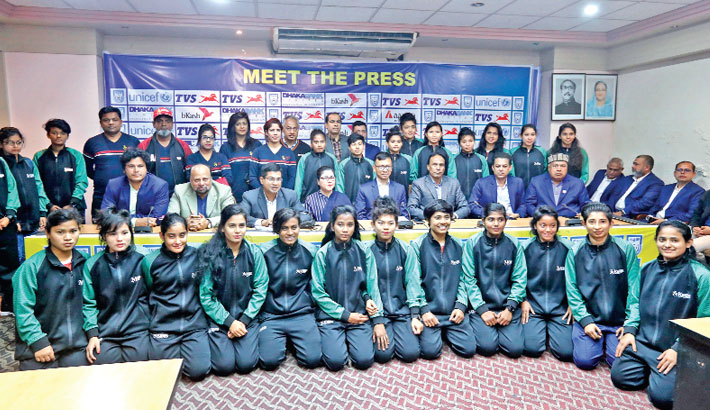 Bashundhara Kings will be hoping to make it big with the skills these girls possess.

Bashundhara Kings President Imrul Hassan has his hopes pinned on to the booters and has the conviction that his side will clinch this title too.

“We have formed a strong squad and I hope that we will be able to take the title home,” said Imrul Hassan.

After completing booters registration formalities, Bashundhara Kings President Imrul Hasan said, “We have formed a strong team including 19 national booters. The Club has signed one-year contract with them [booters]. The prominent clubs are not taking part in the league, so we got the chance to include their booters in our team.”

It was festive mood all around as Bashundhara Kings Women team came on a regal convoy to BFF House which was earlier reserved mostly for senior men’s side but Bashundhara Kings gave their women booters the respect they deserved and left no stone unturned to make the occasion a memorable one.

After a long break of seven years, BFF finally going to hold the league this year but the big clubs including Mohammedan, Abahani and Sheikh Jamal have showed their reluctances to take part.

About their aim, Imrul said, “First, we want to be the champions in the league, and then our aim is to take part in the AFC women’s competition. I am not sure about the criteria of taking part in AFC. But if we get chance, we will obviously take part there. We have planned to sign foreign players for AFC competitions.”

Bangladesh National Women’s team Captain Sabina Khatun said, “Finally we are taking part in the league. Bashundhara Kings wants to work for developing women’s football. Now, it is our turn. Our aim is to be the champions in the league.”