Set up int’l ad-hoc tribunal to probe the crimes 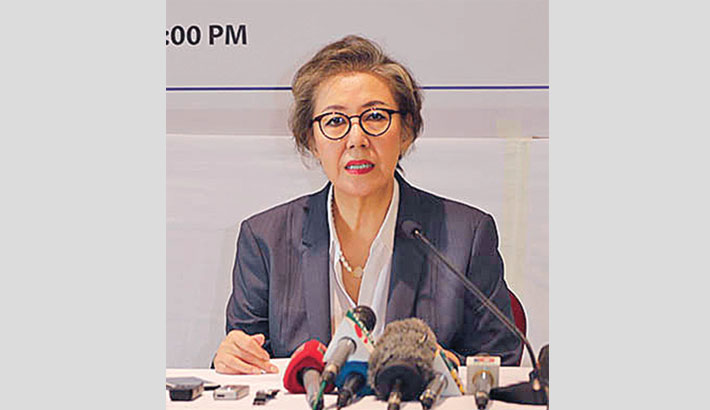 A United Nations rights expert has strongly recommended formation of an international ad-hoc tribunal to investigate and prosecute those responsible for crimes in the form “grave violation of international human rights and humanitarian law” inside Myanmar.

Yanghee Lee, the Special Rapporteur on the situation of human rights in Myanmar, told a press conference that the tribunal, which she thinks, will work as complementary to ongoing efforts on accountability and justice, should  be constituted for ensuring accountability of genocide in Rakhine state.

Prof Lee said as the International Court of Justice (ICJ) announced its decision against Myanmar, that

she has been stressing to set up an international ad-hoc tribunal dedicated to the situation in Myanmar noting that more needs to be done despite some significant achievements over the last two years on justice and accountability front.

In this context, the UN official said she will be providing little more details about setting up tribunal in her report to be submitted to the Human Rights Council session in next March.

Speaking about such tribunals set up in the past, she said victims can seek justice in another court too which will complement with the other efforts. “It’s going to be complementary, it’s not going to be set up to expedite another process because other processes have their own mandates.” The top UN official said “unfortunately the UN Security Council fails to refer the situation of Myanmar to International Criminal Court (ICC) and efforts must continue to pressure the UNSC of its failure to do this.”

The UNSC is not really fulfilling its obligations and responsibilities set for the UN charter, she observed.

On a question about the role of two UNSC members — Russia and China, Prof Lee said she mentioned it many times that it is shameful for those States in the face of credible evidence.

Lee said five permanent members of the UNSC have a vital power, and things have changed; and in the Security Council, there has to be reform on how they deal serious human rights violations.

Responding to another question on ICJ Verdict, she hoped that the Myanmar government will follow the decisions and recommendations that the International Court of Justice (ICJ) may make. “And the international community needs to stay seized on this issue and brings this issue in mind so that Myanmar doesn’t evade its own responsibility.”

The ICJ yesterday (Thursday) ordered Myanmar take all measures in its power to prevent genocide against the Rohingya people.

Prof Lee visited Thailand and Bangladesh this time to speak to interlocutors and receive information about the situation in Myanmar from both sides of the border as she was denied access to Myanmar since December 2017.

The special rapporteur said she found a “deep desire” among Rohingyas about their return to their place of origin in Rakhine State.

She said her mission and the end of her tenure come at a critical time for human rights in Myanmar and she will continue to strive to ‘do her utmost’ to improve the situation.

Asked about her report without visiting Myanmar, Prof Lee said she is absolutely convinced that the report she will submit in March is based on credible facts. “It’ll be non-biased and impartial,” she said adding that it was Myanmar’s loss by not giving her access as there were so many ways to engage with individuals living in Myanmar.