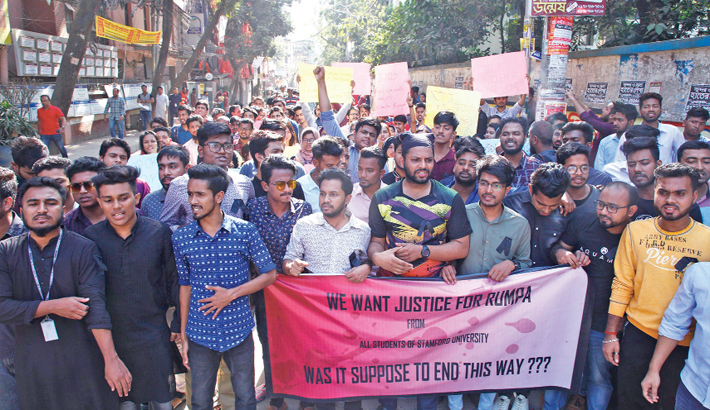 Students of Stamford University take out a procession on the campus in the capital on Friday seeking justice over the alleged murder of fellow student Rubaiyat Sharmin Rumpa. - SUN PHOTO

Students of Stamford University in the capital on Friday staged demonstration seeking justice over the alleged murder of their fellow student Rubaiyat Sharmin Rumpa.

They also brought out a procession and marched towards Viqarunnisa Noon School and College demanding a proper investigation into the incident of Rumpa’s death.

On Wednesday night, police recovered the body of Rumpa on an alley of Siddheswari Circular Road behind Ayesha Complex opposite the Criminal Investigation Department headquarters of police in Malibagh.

It was initially presumed that she died after falling from a building.

Rumpa, a student of the university’s English Department, used to live in the capital’s Shantibagh with her mother and brother while her father was a policeman posted in Habiganj.

A case was filed at Ramna Police Station over the incident.

The marks on her body indicate she fell from height, according to the OC.

Police handed over the body to the family on

Thursday following an autopsy. They are awaiting the results of the examination for further insight into her death.

“We’re investigating how she died and how the body reached the scene,” said Ramna Police Station chief Monirul Islam.