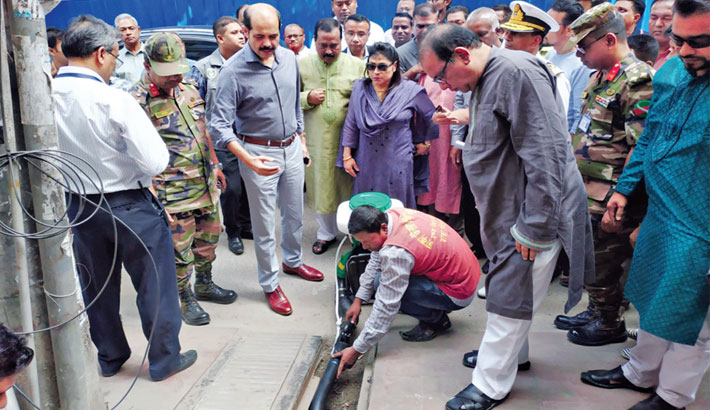 Despite having effective mosquito repellant, fogging machines and adequate manpower, menace of culex mosquito is far from going down in the capital.

Experts said the nuisance may further increase as mosquito population may rise in line with the humidity in the upcoming dry season when larvae will turn into adult mosquito.

After the fatal spell of dengue outbreak, now the population of culex mosquito seems to get the upper hand.

Dhaka South and North City Corporations have conducted survey on the mosquito density and identified around a thousand mosquito hotspots.

Dhaka North City Corporation (DNCC) alone has found 626 mosquito hotspots under its jurisdiction in the last survey and identified seven wards where density of culex mosquitoes is high. The wards are 20, 28, 11, 5, 31, 32 and 17.

On the other hands, DSCC also conducted a similar survey and found a significant number of mosquito hotspots.

Talking to daily sun, DNCC 11 ward councilor Dewan Abdul Mannan said, “A total of 11 staff are working for mosquito control in my ward. We are leaving no stone unturned for keeping mosquito under control. But even my wife is complaining of rising mosquito population.”

Faruk Ahmed, a resident in Chankharpul area which is under 27 no. ward of DSCC said, “Even a few days ago, we could sleep without setting mosquito nets but now the nuisance of mosquito has returned. Its vexation rises particularly at night.”

He added that over the few days, he did not hear the sound of fogging machine.

The city dwellers have been blaming the inaction of the staffers of city corporations for the menace.

On the other hand, the city corporation officials are blaming different government agencies including RAJUK, WASA, BRTC and development agencies as their development projects have created some breeding ground for mosquito.

Wishing anonymity, a DNCC top official said, “See how Gulshan and Banani lakes have turned into a breeding ground for mosquitoes as they are filled with waste. Who will address the issue as RAJUK has the authority over it and it is nonchalant to it?”

“Besides, look at the canals in the capital under WASA. They are completely silted with waste turning it into the breeding ground for mosquito but no initiative is taken by the authorities concerned.”

In addition, city people throw away dirt and waste at whim and look to the city corporations instead to get it cleaned.

Officials of both city corporations are on the same page that certain areas in civil aviation, government offices and colonies, DOHS, BRTC Depo, canals and lakes belonging to different authorities and development project sites are restricted where DCC workers cannot enter.

DNCC Mayor Atiqul Islam held a meeting with different stakeholders who have their authorities on different areas in the capital including RAJUK, Metro rail, Civil Aviation Authority and instructed them to take measure and co-operate with city corporation.

Meanwhile on Thursday, the mayor inaugurated a cleanliness drive on Iqbal road of Mohammadpur area in the capital to tackle the outbreak of culex mosquito.

Starting from Thursday, the drive will continue for 10 days in 54 wards under DNCC. Water hyacinth in the water bodies under those wards will be cleared as per the action plan of DNCC.

Speaking on the occasion, the north city corporation boss said, “The drive against culex mosquito is a continuation of the previously taken drive to control Aedes mosquito in the city. We have purchased some modern equipment to drive out mosquito.”

He added that “Aedes breeds in stagnant water but culex mosquito breeds in waste of drain and ditches.”

Atiqul also urged the government and non-government offices and departments to clean up their neighborhoods and keep it free from unnecessary waste.

“Our study has found that the under-construction building is responsible for 44 percent mosquito population.”

“Our staffers are not sitting idle. We are conducting our regular programme in the morning and evening.”

The official attributed the rise in mosquito population to the forthcoming dry season, plus the canals and water bodies filled with garbage, which are the breeding ground for mosquito.

“Is it possible to clean these every day by city corporation?” he posed a question.