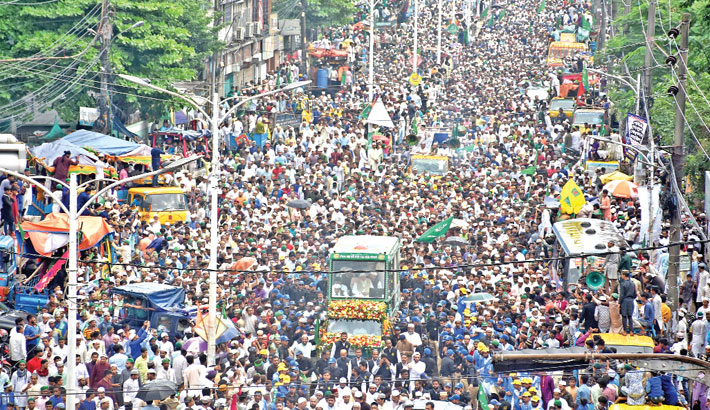 Thousands of Muslim devotees take part in a procession ‘Jashne Julush’ in Lalkhan Bazar area of Chattogram on Sunday to observe the holy Eid-e-Miladunnabi, marking the anniversary of birth and demise of Prophet Muhammad (PBUH). - SUN PHOTO

The holy Eid-e-Miladunnabi, the day of birth and demise of Prophet Hazrat Muhammad (PHUH), was observed in the country on Sunday with due religious solemnity.

On this day in 570, the 12th of Rabiul Awal of the Hijri calendar, Hazrat Muhammad (PBUH) was born in Makkah, Saudi Arabia with divine blessings and messages of peace for mankind.

President Abdul Hamid and Prime Minister Sheikh Hasina issued separate messages marking the day and sought eternal blessing for the people’s welfare alongside peace and harmony in the country and elsewhere in the world.

The day was a public holiday. The Muslims across the country offered special prayers in the day.

Islamic Foundation took a fortnight programme at the Baitul Mukarram National Mosque in the city on the day.

The programmes including religious sermons, seminars, exhibition of Islamic calligraphy, discussion on Prophet Muhammad (PBUH), Islamic cultural competitions and recitation of the holy Quran were held.

A month-long Islamic book fair is being organised on the mosque premises to mark the birth and death anniversary of the Prophet Hazrat Muhammad (PBUH).

Thousands of Muslims of different spiritual and social organisations like the Maizbhandar Darbar and other spiritual hubs took out procession across the country chanting praising the prophet for his role for the mankind.

In his speech, Zaker Party chairman urged the Muslims to be united.

Tight security measures were taken by the law enforcement agencies across the country to ensure a peaceful celebration of Eid-e-Miladunnabi.

Meanwhile, the holy Eid-e-Miladunnabi (SM) was observed with due solemnity at Bangladesh Deputy High Commission in Mumbai on Sunday.

On this occasion, the Deputy HC held a discussion, doa, milad mahfil and special munajat.

Expatriate Bangladeshis living in Mumbai, local notables, officers and workers of the Deputy HC and their family members attended the programme.