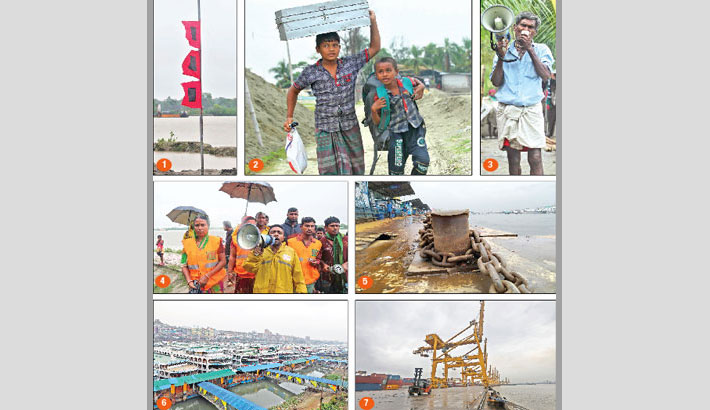 As part of preparedness to tackle the feared hit by the cyclonic storm ‘Bulbul’, all-out preparations have been taken to cope with any possible situation that might arise due to the advancing cyclonic storm. The snaps were taken on Saturday. (1) Red flags signaling danger flap in a wild surge of wind at Patenga sea beach. (2) Two panic-stricken children along with their belongings make a mad rush to a cyclone shelter in Chattogram. (3 & 4) Volunteers makes announcement through loudspeakers asking people to take safety measures amid the forecast of cyclone ‘Bulbul’. (5 & 6) Launches remain stationary with no passengers at Sadarghat launch terminal and (7) Chattogram port shut its activities for the approaching severe cyclonic storm. —SUN photo

CHATTOGRAM: Some 200,000 people of coastal upazilas under the Chattogram district have moved to the safer places including shelter centres opened to tackle the feared hit by the cyclonic storm ‘Bulbul’ on Saturday.

The administration was carrying out miking to alert costal people for moving to the shelter centres to avert any untoward incident.

Besides, awareness campaign was also being carried out at the risky foothills to ward off any accident in feared landslide.

Chattogram Deputy Commissioner (DC) Md Elius Hossain told the daily sun that some 200,000 people from the coastal upazilas including Sandwip, Sitakunda, Mirsarai, Banshkhali and Anwara moved to the shelter centres and safe houses of relatives since Saturday morning.

The concerned people representatives and volunteers were motivating those who didn’t leave houses till afternoon, said the DC.

The dry foods and other necessary items were also kept ready to distribute among the affected people, he added.

Earlier, the authorities concerned took necessary steps as a part of preparedness to tackle the feared hit by the cyclone immediate after announcement of danger signal No.6 for Chattogram on Friday.

The district administration kept around 4,500 cyclone shelters prepared for providing shelter to

people of 15 upazilas under the district.

Besides, volunteers of different organisations were kept ready to assist the affected people.

On the other hand, the Health department formed 284 medical teams and cancelled leave of all doctors, nurses and other medical staff keeping them standby for emergency services.

Though the administration was carrying out miking for moving to the shelter centres, many people in the city’s coastal areas were seen staying their houses till Saturday evening.

They were observing the situation while many were seen strengthening their houses to protect them from the gusty wind of the cyclone.

On the other hand, all operational activities at the jetties and outer anchorage of Chattogram Port remained suspended since Friday night.

Concerned authorities also suspended flight operations to and from the Chattogram Shah Amanat International Airport for 14 hours since 4:00pm on Saturday.

The airport Manager Wing Commander Sarwar-E-Jahan said that flight operation at the airport was normal till 4:00pm and the scheduled flights were cancelled after suspension of the operation.

“Decision regarding resuming the operation will be taken considering the weather condition,” he added.