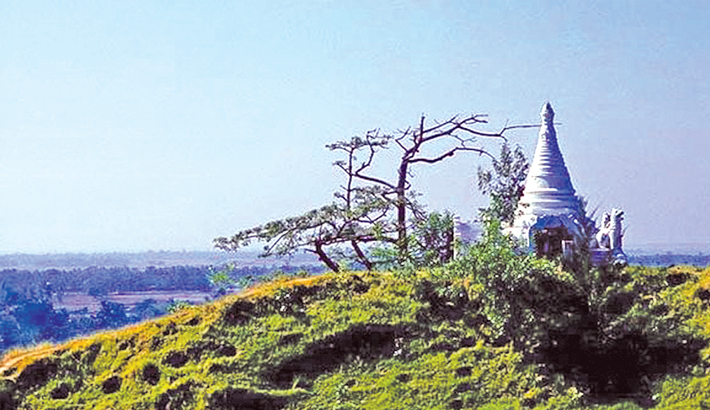 Moheshkhali - the only mountainous island of Bangladesh stands in the Bay of Bengal, about 15 km away at north-western side from the Cox's Bazar. With 268 square kilometre  of its total area, this lovely island attracts many foreign and domestic tourists with its archetypal beauty of nature.  It's termed as the jewel of Cox's Bazar - world's longest unbroken sandy sea beach. The island is also connected to the mainland, but traveling to Moheshkhali by boat is recommended, as it is a kind of adventurous journey to catch precious memories of exploring beautiful Bangladesh.  It takes a half-an-hour by speedboat and by trawler almost one hour.

The island is surrounded with breathtaking mangrove forest. The spectacular short-ranges of hills and stunning landscapes seduce the heart of tourists. There are some hills standing at just over three hundred metres. At the low-lying areas of the island tourists will find salt-field and shrimp cultivation and on the plain area eye-catching green betel grove. There are a few small beaches.

The other attractions at Moheshkhali are 'Shrine of Adinath' - a Shiva temple, the quaint Buddhist temple as well as a Pagoda that beckons tourists to visit the island. Adinath Temple of 600 hundred years old is very vibrant one that brings in many devotees on different occasions. It is located on the summit of Moinak Hill of the Island. Every year in the Bengali month of Falgun (February), a 13-day long annual fair is held here. The fair takes place at the foot of the Moinak Hill. Thousands of Hindus from home and abroad participate here for worshiping. To go to the Temple, tourists have to remove shoes but they can wear socks.

The Temple is 6 m high and measures 10.5 m × 9.75 m; the inner walls are 1.05 m thick, while outer walls are 0.60 m thick. The Temple consists of 3 parts; the northern part, which is older, contains two square rooms (3.35 m each side) for worship – the eastern one has the image of Adinatha Banalinga Shiva and the western one has the image of eight-armed Durga (Idol). The entrance of the Temple is bow-shaped, while the entrances on the northern and southern sides have been closed with brickwork. There are two windows, one on the east and the other on the west side. The two rooms are covered with domes on pendentives. The finials on top are decorated with lotus, kalasa and chakra. The tops of the octagonal pillars have kalasa and twined scrolls. The top of the arch on the western side has floral and the eastern one has trixul decoration. There are two niches on the southern wall. At the backyard, there is a pond. The pond's water is very clean.

There is a long history of this Temple. The construction of Adinath temple has close association with the Natha community. It is believed that one of the disciples of Goraksanatha may have named the ghat (river landing) at Moheshkhali after the guru. Natha philosophy evolved out of the long association of the Saivites with the Buddhists and in the 10th-11th centuries emerged Tantric Shastras. Adinatha (variants Matsyendranatha or Minanatha) emerged through this process of evolution. Nathism represents the folk religion of Bengal based on mantra-tantra and asceticism.

Buddhist Monastery is another attraction at Moheshkhali Island. This monastery is located at Boro Rakhaine Para of Gorokghata, near to the dockyard of the island. There are several buildings inside the monastery premises. Also inside the boundary, there are two pagodas, which are made of bronze. Inside the Monastery, there are several statues of Lord Buddha with a big one. The Buddhist people mostly Rakhaine community come here for their regular prayer.

Tourists can explore the tiny village called 'Thakur Tala'. There are some souvenir shops near the temple. There are many things to make fun in this drifting island.  Standing on the peak of hills in this island you can have a glance of the immense blue water of the Bay of Bengal. The island is very much green and picturesque; one will just fall in love with nature. The island is also abounds with a wide varieties of local fishes that offer you nice delicacy.

Moheshkhali possesses a unique and pleasant atmosphere. Visitors can enjoy the tranquility of the island and simple lifestyle of people. If you visit, definitely you will get a memorable experience from one of the most beautiful destinations in Bangladesh.