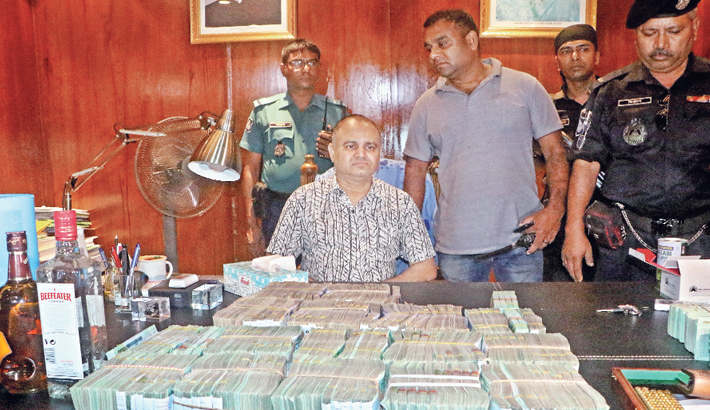 The elite Rapid Action Battalion (RAB) arrested another political leader, Golam Kibria Shamim, in the ongoing crackdown on corruption and seized huge money, weapons and drugs from his office in Niketan area of the capital on Friday.

Shamim claimed himself as the cooperative affairs secretary of Jubo League, the youth front of the ruling Awami League, but the organization rejected his claim saying that Shamim was not one of their leaders.

He was a member of the Jatiyabadi Chatra Dal, the student front of the opposition Bangladesh Nationalist party, security sources said.

The latest arrest came two days after Jubo League leader Khaled Mahmud was put behind bars for his involvement in illegal casino business and extortion.

Sources said RAB personnel arrested Shamim along with his seven bodyguards from his Niketan office in the capital in the morning.

The elite force also seized Tk 1.55 crore in cash, cheques of FDR worth around TK 200 crore, arms and drugs from the office.

Earlier, RAB members cordoned off the office of Shamim and at one stage, a RAB-1 team, led by Executive Magistrate Sarwar Alam, raided it.

Of the FDR amount, Tk 140 crore was shown under his mother’s name while the rest amount under his name, the magistrate said.

“There are allegations of extortion and tender manipulation against him.”

RAB personnel checked the licences of weapons carried by Shamim’s bodyguards and detained them.

Shamim lived in Niketan from where he was brought to his nearby office. The raid was conducted in his presence.

Shamim is known as a powerful contractor in Sabujbagh, Bashabo, Motijheel and other areas of Dhaka. He controls most of the contracts of the public works department.

Earlier, Prime Minister Sheikh Hasina hinted at a tougher action against the party men who are involved in corruption and misdeeds.

“I’ve taken action against Chhatra League and Jubo League. I won’t spare anyone,” she was quoted as saying when acting BCL president Al Nahian Khan Joy and general secretary Lekhak Bhattacharya met her at Ganabhaban on Thursday night.

The crackdown on the corrupt people would continue, the premier said.

During the meeting, Sheikh Hasina warned leaders of pro-AL bodies not to do anything that tarnishes the party’s image and hampers the country’s development.

After his arrest, Khaled Mahmud has been expelled from the post of organising secretary of Jubo League Dhaka South Unit.

On Wednesday, RAB members arrested him from his Gulshan residence in the capital on charges of running an illegal Casino.