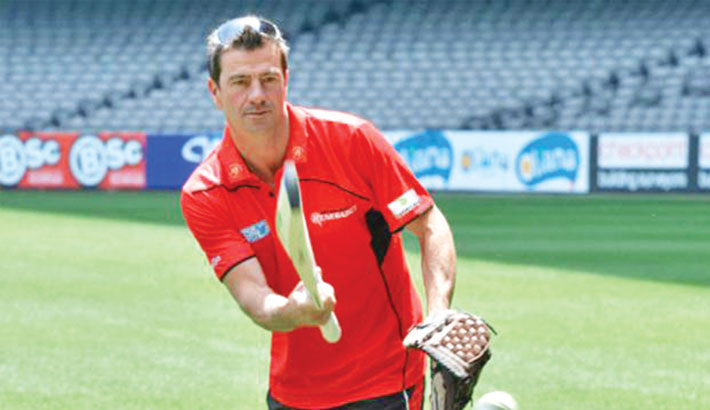 Bangladesh Cricket Board (BCB) High Performance (HP) Unit head coach Simon Helmot has said that every time any age level team is playing any tournament or bilateral series, they are actually focusing and preparing themselves to be ready for the time they get into the national side so that the National team can boast a rich pipeline.

Meanwhile on Friday, BCB announced Bangladesh Emerging (HP) 15-man squad naming Nazmul Hossain Shanto as captain of the unit for the three-match one-day series against Sri Lanka Emerging Team. There will be three 50-over matches and two four-day matches between the two high performing units. The first one-day match will be played at BKSP in Savar on August 18. Sri Lanka Emerging Team has already landed in the country.

Ahead of the series against Lankans and also the upcoming Emerging Teams Asia Cup 2019 in November which will be hosted in Bangladesh, HP Unit head coach Helmot said that such age based tournaments are big opportunity for the young players to prepare themselves more as player and be ready for the national team.

“The great thing to play in an under-23 tournament is that it gives the players the opportunity to help them get ready to play for the national team. Obviously, it is very important for us to keep developing. The players are getting to swing after their Eid break,” Helmot told reporters.

BCB HP unit possess some young cricketers who might not have been part of the national side on regular basis but have had some experience with board’s national side as some of them also toured England with the national team before ICC World Cup 2019. Captain Shanto played two Test matches and three ODIs while Afif Hossain featured in just one T20I. Yasir Ali, though, has not played any matches for national team but the middle order batsman has been around for a long time.

Despite the fact, Helmot, the Australian thinks these players are still too inexperienced to represent the national team and he said that the young players need more chance to gain more experience before breaking into the national side so that they can face the unfamiliar bowlers and batsmen when they will be playing for the national team.

“When they will get more opportunities they will be ready. They need physical preparation, in the feeling, in their backfoot play, in their concentration at the ball to ensure when they play for the national side, it will not be a new feeling. The feeling will not be new. The opposition might be new, the crowd might be new, but the aim should not be new,” Helmot told