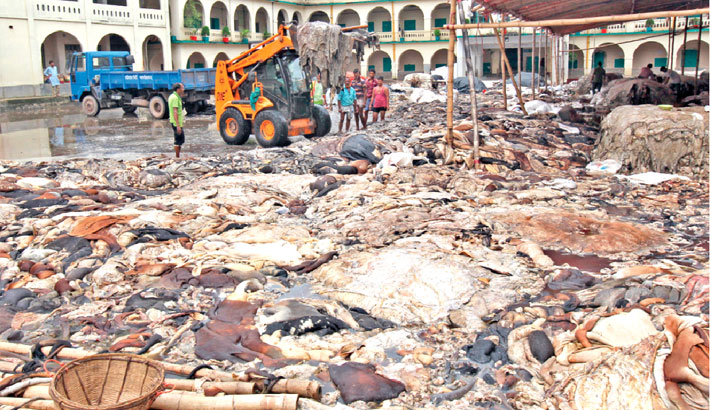 Frustrated at low prices, seasonal traders dump rawhides of sacrificial animals on a road in front of wholesale market in Chattogram city. The photo taken on Tuesday shows that city corporation workers are removing rawhides from the road in Bibir Haat area.

CHATTOGRAM: Seasonal rawhide collectors of sacrificial animal abandoned around one lakh pieces of rawhide on the roads amid an unprecedented fall in price this year.

Rawhide traders alleged that throwaway prices offered by the wholesale buyers resulted in the situation.

The buyers, however, blamed lack of capital and damage caused to the rawhides for the delay in reaching the warehouses.

Sources said there are around 250 rawhide warehouses in the port city of those around 112 are registered with Chattogram City Corporation Rawhide Traders’ Association.

Most of the warehouses are situated in the city’s Aturar Depot, Sholoshahar, Bibir Hat and Agrabad areas.

The buyers set a target for collecting around 550,000 pieces of rawhide of sacrificial animals from Chattogram, Cox’s Bazar and three hilly districts of Rangamati, Khagrachhari and Bandarban this year.

The association leaders claimed that they could collect 60 per cent of the target until Tuesday.

The government fixed the rate of cowhide at Tk 35-40 per square foot (sft) for outside of the Dhaka this year.

The seasonal traders collected the rawhides from different areas of the city and district at an average price of Tk 300 to Tk 400 per hide.

Shahidul Islam collected some 200 rawhides from different areas and came to the Bibir Hat for selling those on Tuesday.

The rawhides were lying on the road till afternoon as none of the buyers offered more than Tk 50 for each of the hides, said Shahidul.

Another collector Parvez also arrived in the area with some 250 rawhides but failed to get price more than Tk 50 per piece.

Many seasonal collectors like Shahidul and Parvez were compelled to sell the rawhide with a heavy loss.

Many collectors also failed to manage any buyer that compelled them to leave the rawhides on the road.

Many of them also broke into tears facing the unprecedented loss.

The collectors alleged that the warehouse owners created the situation by forming a syndicate.

Some 80,000 to 100,000 pieces of rotten rawhides were left on the road and those were buried at CCC dumping stations by the conservancy workers, said the councillor.

The association President Abdul Kader said they get around Tk 30 crore as arrear for rawhides from the tanneries in the capital.

“We contacted the owners before the Eid Ul Azha. But they didn’t pay the dues, making us hostage to them,” he said.

Due to the crisis of money, 50 per cent wholesalers could not buy rawhide this year resulting in the situation, he said.

Besides, it requires mixing of salt within seven to eight hours for preserving the rawhides. But, many of the seasonal collectors didn’t mix up salt and delayed to bring them for better prices, he added.

He also observed that the government’s decision for exporting the rawhide should have been announced one week before the Eid. “This could help avoid the situation,” he said.