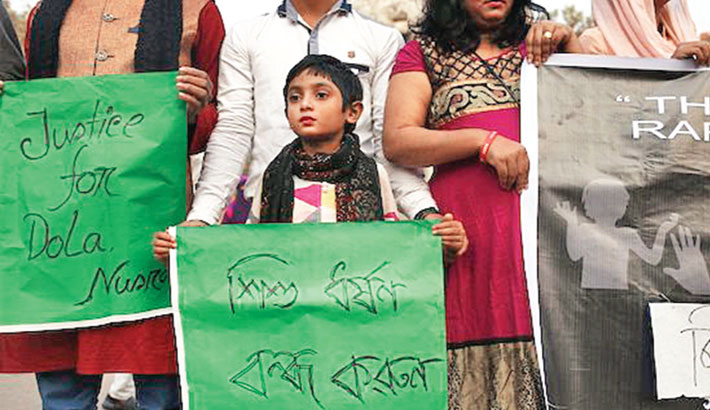 Bangladesh is experiencing an appreciable change in economy because of women’s empowerment. The country secured the first spot in gender equality (among South Asian countries) for the second consecutive year at the Gender Gap Index 2017.

As half of the population is women, Bangladesh experienced an economic boom due to increased participation of women in the economy. As a matter of fact, national and international policy strategies have been taken to ensure that women have greater control over their lives and can take decisions of their lives.

However, this is not enough. Women in Bangladesh are not safe, physically or mentally. According to Bangladesh Mahila Parishad (BMP), at least 592 incidents of rape have occurred across Bangladesh in the last six months, but less than 1 per cent of these ever get punished. Although the prime minister of our country is a woman, women are not getting any benefit of it. Women are getting raped in bus, marital rape is not mentionable and the concept of consent is foreign to our country.

Government seems very relaxed about the fact that almost all the rape assailants are roaming freely. That women are being raped or child rape is increasing at an alarming rate does not seem to be an issue anymore. Some people think that women staying indoors will improve the situation.

In truth, women are keeping the wheel of our economy running. Despite that, we are not providing proper security for our women or female child. Few days back there was news about a seven year old girl being raped and strangled. There is still no progress in the Tonu murder case.

Whenever a rape happens the first thing people think about is the type of dress the victim was wearing. Dress is not the reason behind rape. If cloths were the reason behind these occurrences, then Allah would never ask men to cast down their gaze.

After all these, all we are doing is asking women either to stay indoors or stay alert. “Men will be men” this is what we say about the rape assailant. There are videos about how to differentiate between a good touch and a bad touch but besides that we must teach everyone from early childhood to respect the opposite gender.

Instead of creating awareness in women or children we must teach men how to control themselves, to follow Islam, as 90 per cent of our population is Muslim. If only we start asking men to cast down their looks and guard their private parts a lot of our problems will be solved. Society should encourage men to treat women as a human being, not as a piece of meat.