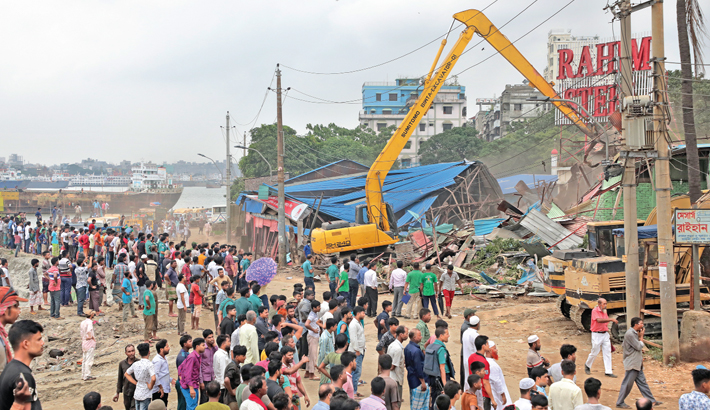 At least five staffs of Bangladesh Inland Water Transport Authority (BIWTA), including an executive magistrate, were injured when a group of miscreants attacked them during an eviction drive at Postogola along the Buriganga riverbank in the capital on Thursday.

As part of the ongoing drive against illegal establishments along the Buriganga river, the BIWTA team, led by injured executive magistrate Mostafizur Rahman, launched the drive in the morning.

At the beginning of the drive, the team demolished more than 30 illegal establishments.

Later, the team went to a sand quarry belonging to local musclemen Bappi and Ripon and tried to evict it.

Later, a team of police went to the spot and arrested Bappi while the others managed to flee the scene, he said. The drive continued till 5:00pm.

BIWTA had been carrying out the eviction drives against a huge number of unauthorised establishments along the river Buriganga for a long time.

Earlier, the BIWTA during its nine-day drives demolished at least 1,500 illegal structures for setting up the establishments violating the demarcation line of the river Buriganga.

Prime minister Sheikh Hasina at an Executive Committee of National Economic Council (ECNEC) meeting in 2016 formed a taskforce to protect the rives from pollution and bring back the navigability of the rivers around Dhaka and the river Karnaphuli in Chattogram.

The BIWTA is carrying out the eviction drive as part of the decision of the prime minister. State minister for shipping Khalid Mahmud Chowdhury in parliament session last week said, “No influence from any quarters can resist the encroachment on the bank of rivers.”