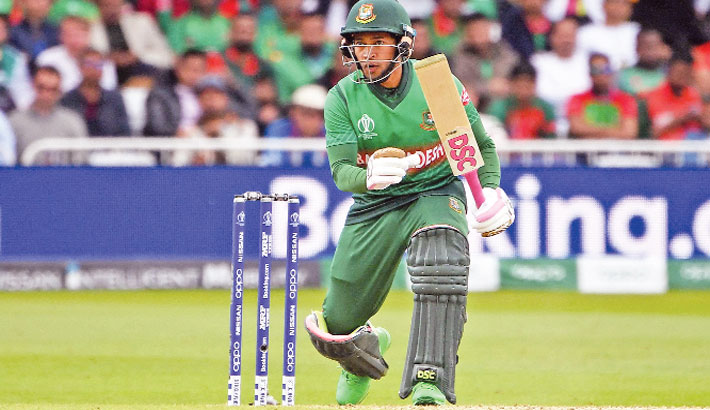 Mushfiqur Rahim plays a shot during the Cricket World Cup group stage-match between Australia and Bangladesh at Trent Bridge in Nottingham on Thursday. — AFP Photo

Bangladesh put up a strong fight against Australia but fell short of the mammoth target of 382 runs in a crucial match of the ICC Cricket World Cup in Nottingham on Thursday.

Bangladesh lost to mighty Australia by 48 runs in their do-or-die match.

Despite a feisty century from Mushfiqur Rahim, Bangladesh managed to post 333 runs, losing 8 wickets in their 50 overs.

Ace all-rounder Shakib Al Hasan, fresh from his match-winning century against West Indies, fell for 41 runs when, deceived by a slower ball from all-rounder Marcus Stoinis, he chipped a catch to Warner at mid-off.

Tamim Iqbal, however, kept going to complete a 65-ball fifty, but eventually was sent back with a stunner from Mitchel Starc after scoring 62 runs from 74 balls.

Mushfiq came into the crease and inspired the Tigers to go big. He held the innings together as man with the golden bat, Liton Das, scored 20 runs off 17 deliveries.

But it was his 127-run partnership with Mahmudullah Riyad which put Bangladesh in control. Riyad amassed 69 runs smashing 5 fours and 3 sixes.

Nathan Coulter-Nile practically stalled Bangladesh’s chase picking up Mahmudullah and Sabbir Rahman in consecutive deliveries in the 46th over of the match.

Mushfiqur remained unbeaten with 102 runs with 97 balls smashing 9 fours and a six.

Earlier, Australia put up 381 runs on the scoreboard losing 5 wickets in 50 overs at Trent Bridge in Nottingham on Thursday.

Australian opener David Warner scored 166 runs off 147 balls while Usman Khawaja made 89 runs, posting the commendable total against Tigers before rain forced the umpires to stop the game for a brief period only to resume few minutes later.

Soumya Sarkar turned out to be Bangladesh’s best bowler picking up the wickets of both the openers before he also scalped one-down Usman Khawaja to finish with 3-58.

Warner, who looked to be playing a typical aggressive innings, can thank Sabbir Rahman for dropping him at point on 10 runs and missing another opportunity when he was on 72 runs after fumbling to complete a run out.

Rubel Hossain was also involved in first two wickets but not before the Australian openers punished Bangladesh’s bowling heavily.

Warner and Finch shared 121 runs in the opening stand without facing much of a trouble before Soumya struck in his first over.

Rubel took the catch at short third man as Finch departed for 53.

Warner meanwhile took the control of the proceedings and reached his second century of the tournament off 110 balls.

Khawaja gave him brilliant support as the pair added 192 runs for the second wicket before Bangladesh had their second success in the game.

Ironically, it was Soumya, who struck again and Rubel took the catch at third man to deny Warner a bigger innings.

His innings set the perfect platform for Glenn Maxwell to launch a scathing attack and he made no mistake in doing so.

Rubel ended his 10-ball cameo of 32 runs with a direct throw before Soumya had Khawaja caught at back, Mushfiqur Rahim and Mustafizur Rahman trapped Steven Smith leg before to bring some respite for Bangladesh.

The Tigers came into the game with two changes from seven-wicket win over West Indies, bringing in Sabbir and Rubel for injured Mosaddek Hossain and Mohammad Saifuddin.

Mossddek injured his shoulder during West Indies game while Saifuddin aggravated an old back injury.

Australia made three changes from the side that beat Sri Lanka by 87 runs at the Oval, with fit-again all-rounder Marcus Stoinis, paceman Nathan Coulter-Nile and leg-spinner Adam Zampa returning in place of batsman Shaun Marsh and fast bowlers Jason Behrendorff and Kane Richardson.