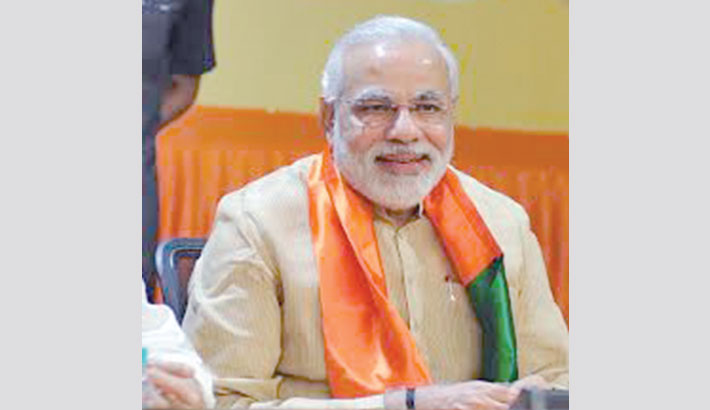 NEW DELHI/AYODHYA: Indian Prime Minister Narendra Modi promised to unite the country on Thursday after a big election win, with his party on course to increase its majority on a mandate of business-friendly policies and a tough stand on national security, reports Reuters.

Official data from the Election Commission showed Modi’s Hindu-nationalist Bharatiya Janata Party (BJP) ahead in 300 of the 542 seats being contested, up from the 282 it won in 2014 and more than the 272 seats needed for a majority in the lower house of parliament.

That would give it the first back-to-back majority for a single party since 1984. “Together we will build a strong and inclusive India,” Modi said on Twitter.

Modi’s victory boosted financial markets as investors expect his government to continue to pursue economic reforms. He will be under pressure to provide work opportunities for the tens of millions of young people coming on to the job market in the next few years and to boost depressed farm incomes.

“The immediate challenges are to address employment, the issue of agricultural income and revive the banking sector,” said Madan Sabnavis, chief economist at Care Ratings in Mumbai.

But making good on his promise of unity will be difficult as the BJP campaign was often divisive, and members of the minority Muslim community expressed fears that they were being treated as second-class citizens.

His pledge to take a strong stand against a separatist movement in the Muslim-majority Kashmir region has added to tensions with nuclear-armed rival Pakistan. Members of his party now want him to take a harder line on national security, as well as build a Hindu temple on the site of a mosque that was demolished by a Hindu mob in Ayodhya in 1992.

“I want Modi to finish terrorism from Kashmir (and) make Pakistan bite the dust again and again,” said Shekhar Chahal, a BJP worker from New Delhi.

“I am confident that Modi will also make the temple in Ayodhya.”

Cheering supporters set off firecrackers and showered the mastermind of the campaign, BJP President Amit Shah, with petals as he arrived at party headquarters in New Delhi.

“It’s a stamp of approval by voters on the honest and decisive leadership of Prime Minister Modi,” said Nalin S Kohli, a BJP spokesman.

“Why despite a weak economy people preferred the BJP is something we have to understand,” said Salman Soz, a party spokesman.

“People have given them a second chance. I hope they use it well.”

The NDA’s predicted margin of victory, at 348 seats to 85 for the Congress-led United Progressive Alliance, according to TV channel NDTV, is much larger than surveys indicated in the run-up to the vote.

Most polls indicated a victory for Modi’s alliance but short of an overall majority.

Final results are due by Thursday evening. Modi was under pressure when he began campaigning, losing three state elections in December amid rising anger over farm prices and unemployment.

However, campaigning shifted toward India’s relationship with Pakistan after a suicide bomber killed 40 Indian police in the contested Kashmir region in February.

Modi ordered an air strike on what India said was a militant training camp on the Pakistani side of the border, a tough response that benefited the right-wing BJP, analysts said.

Pakistan has this week signaled a willingness to open talks with India, but in a possible warning, it announced that it has conducted a training launch of a surface-to-surface ballistic missile, which it said was capable of delivering conventional and nuclear weapons at a range of up to 1,500 miles.

The BJP has also capitalized on the star power of Modi, a frenetic campaigner, as well as its superior financial resources. It outspent Congress by six times on Facebook and Google advertising, data showed, and by as much as 20 times overall, sources told Reuters this month.