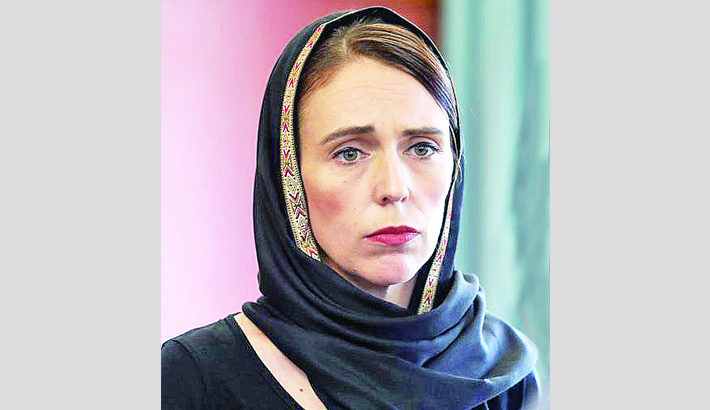 In one of her first interviews since then, she told the BBC that she rejected the idea that a rise in immigration was fuelling racism.

The first funerals, of a father and son from Syria, took place on Wednesday.

Hundreds of mourners gathered at a cemetery near the Linwood Islamic Centre in Christchurch, one of two places of worship targeted.

Australian Brenton Tarrant, 28, has been charged with murder. Fifty people died in the attack.

Asked about the rise of right-wing nationalism she said: “This was an Australian citizen but that is not to say that we do not have an ideology in New Zealand that would be an affront to the majority of New Zealanders.”

She said there was a responsibility “to weed it out where it exists and make sure that we never create an environment where it can flourish”.

“But I would make that a global call,” she added. “What New Zealand experienced here was violence brought against us by someone who grew up and learned their ideology somewhere else. If we want to make sure globally that we are a safe and tolerant and inclusive world we cannot think about this in terms of boundaries.”

She defended New Zealand’s record on accepting refugees, saying: “We are a welcoming country. I utterly reject the idea that in any way in trying to ensure that we have a system that looks after those who choose to call New Zealand home, that we have perpetuated an environment where this kind of ideology can exist.”

Ms Ardern also defended her call not to refer to the suspect by name.

“One of his goals... was that he sought notoriety and we will absolutely deny him that,” she said.

No leader can prepare for a moment like this. Carrying a nation through tragedy comes down to instinct and resolve. But Jacinda’s Ardern’s response to the Christchurch attack has been admired perhaps because it has felt honest and sincere.

Compassionate but composed, from the first few hours she sought to place herself on the side of the victims and their families. Wearing a hijab as a sign of respect may seem a simple gesture, but it has resonated with the relatives and friends still lost in grief.

So too have the phrases she has deliberately repeated since the attack. I have heard her words - “we are one, they are us” - spoken back to me by the families of victims here in Christchurch, and seen it written on countless cards and posters alongside all the bouquets of flowers.

Of course, maintaining this feeling of national unity is a different challenge - but she has already created a platform of trust from which she could deliver meaningful change.

Police on Wednesday named six of the victims of the shootings at the Al Noor mosque and hoped to release all 50 bodies to the families by the end of the day. All post-mortem examinations were complete, police said.

However, some families expressed frustration with the delayed process. Mohamed Safi, 23, whose father Matiullah Safi died at the Al Noor mosque, complained about the lack of information.

He told AFP news agency: “They are just saying they are doing their procedures... Why do I not know what you are going through to identify the body?”

Police Commissioner Mike Bush has said authorities had to prove the cause of death to establish for the courts to treat it as murder.

Christchurch city officials issued strict guidance to the media ahead of Wednesday’s funerals and requested that the families be left alone.