The Man Who Made a Nation 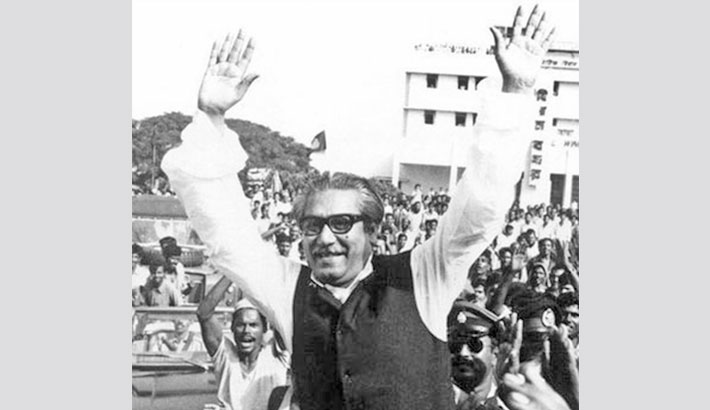 Bangabandhu’s Homecoming Day highlights a thrilling victory by Bangladesh’s people over a demonic Pakistani regime. The crowd shuddered with sky-scrapping “Joy Bangla” slogan to welcome him. The bright sun went up. The crowd overfilled the stage, where their hero lingered, and gazed up at him in wonder, as if his very bright face was a sign from the gods. On arrival he was all smiles, but towards the end you could see his eyes started to glisten. The Bangladesh War is a textbook material for students in history. History – all those events – has passed us. But the entire trauma still lives inside us. It’s great for a great hero to be home. He received a hero's welcome; and a great hero’s welcome in his own homeland on 10 January 1972.

Father of the Nation Bangabandhu Sheikh Mujibur Rahman returned to the sacred soil of independent Bangladesh from his captivity in a jail of Pakistan on this day. On March 26 in 1971, he proclaimed independence of Bangladesh and urged his beloved people from all walks of life to participate wholeheartedly in the nation's war of liberation. At his clarion call, people fought valiantly like the words of James A. Garfield, “We do not know one promise these men made, one pledge they gave, one word they spoke; but we do know they summed up and perfected, by one supreme act, the highest virtues of men and citizens. For love of country they accepted death, and thus resolved all doubts, and made immortal their patriotism and their virtue” and thus Bangladesh was finally born. But it is true that “the joy and happiness of our Victory Day remained incomplete in the absence of the figure that was the inspiration for the nation to fight against an enemy so overwhelmingly superior. When people learnt about his homecoming, it was yet another celebration.

All roads led to the old airport on the day and the crowd swelled until it turned into a sea of people who were waiting with bated breath to greet the supreme leader on the soil of the new country. One can recall the moments when he appeared at the door of the aircraft and waved at the waiting crowd assembled there to have a glimpse of this man who had been instrumental in liberating them from the clutches of oppressors and exploiters. It was genuinely a hugely momentous occasion for the nation. The leader then moved on towards Suhrawardy Udyan where he was to deliver his homecoming speech. The wildly jubilant crowd moved along with him like a monolithic mass. They wanted to hear from him, as they had heard him on March 7, 1971. He spoke at length; to rebuild the country, a country that had not only suffered the destruction of infrastructure and communications networks but was also traumatised by the random and ruthless killing of three million people, loss of honour of thousands of women and the physical dislocation of ten million people.  He did not promise them the moon, rather he advised them to be more tolerant and brace for more sacrifice to see better times. He inspired them, urged them on and instilled in them the confidence that was so necessary at that point in time.

Journalist Fox Butterfield of The New York Times, who witnessed Bangabandhu's homecoming, wrote a special report for his Daily titled "Sheikh Mujib Home; 500,000 Give Him Rousing Welcome". Narrating Bangabandhu's return to home, he wrote, "Sheikh Mujibur Rahman received a tumultuous, triumphant welcome today on January 10, 1972 from a crowd of half a million Bengalis as he returned to his native land for the first time since he was arrested nine months ago by the Pakistani authorities." The exultant crowd showered Sheikh Mujib with flowers and chanted "Joi Bangla" ("Victory of Bangla") as their leader stepped from the British Air Force jet that had brought him to his newly born country," the report said.

As the flower-bedecked truck on which Sheikh Mujib rode from the airport passed slowly through the crowd, there were long rhythmic chants of "Sheikh Mujib, Sheikh Mujib, Joy Bangla and Joy Bangla", the report further added. Thousands of voices also chanted, "A new nation has come upon the earth -- Bangladesh! Bangladesh! A new ism has come to the world --Mujibism! Mujibism!" Writing about Sheikh Mujib's popularity, the NY Times reporter Butterfield wrote, "Sheikh Mujib's popularity is so great that his word has virtually become law with many Bengalis."

But some brutish and disgruntled military officers of his own country launched an assault on him and most of his family members on August 15, 1975 and Mujib fell along with them heroically. On the black night of March 25, 1971 when it was suggested that he should go into hiding, he flatly refused and retorted: “I must share the sufferings of my people along with them. I must share. I cannot leave them in the face of fire. I cannot.” Really he did not flee to safety from the war-torn country. He willingly became the first prey to the marauding force. Love for the motherland had prompted him to take such a risk. On that historic day of 10 January 1972, addressing a huge gathering in Suhrawardy Udyan, Bangabandhu declared: “Bangladesh has earned independence. Now if anybody wants to seize it, Mujib would be the first man to sacrifice his life for the protection of that independence”.

The Sheikh Mujib is above all a warm, forgiving and open human being. We can say about him in the words of H Glenister Taunton, “If we are to bring about any form of harmony between the peoples of this planet, he is our role model. He is a giant of a man who humbles us all.” Because he made such a huge difference to so many people's lives in the third world, but he is also a true inspiration for people of all walks of life all over the world.

Saltburn A Barr’s words are appropriate to him, “He recognised the need for dignity in the lives of others, and respected it as much as his own.” He was a tireless campaigner for social justice and peace within a democratic framework. He was a true hero of the people; and he was a global figure. He is the most significant political figure of our time, in terms of his engagement with our own concerns, perceptions and dreams. He is like the words of Pete Hewitt, “He is uncompromising in standing up for what he believes is right and does not stand on pleasantries.” Bangabandhu’s policy of unity regardless of ideology was essential to the Grand Victory of 1971 that defeated the neo-Hitler, Yahya Khan and his coterie in 1971 War. His able and dynamic leadership indicate a worldwide respect for the man who stood up against the neo-Nazis. He showed the diversity of his talents and was able to assert supreme power over his beloved people. He was the victor at the end of the bloodiest episode in Bangladesh’s history. Bangabandhu led by example, caring for the poor and needy. He attracted many followers by living simply. He was known as a politician, and world leader. He was noted for his courage to stand by the oppressed people. Like Frederick Douglass, he reminds us: "I go to suffer with them; to toil with them; to endure insult with them; to undergo outrage with them; to lift up my voice in their behalf; to speak and write in their vindication; and struggle in their ranks for the emancipation which shall yet be achieved.”

His ability to summarise the range of human emotions in simple yet eloquent words and phrases has led to his enduring popularity and power and the standard to which others do not hold. Eleanor Roosevelt’s words can be echoed here, “One thing I believe profoundly: We make our own history. The course of history is directed by the choices we make and our choices grow out of the ideas, the beliefs, the values, the dreams of the people. It is not so much the powerful leaders that determine our destiny as the much more powerful influence of the combined voices of the people themselves” and Mujib brought in the combined voices of his people together and made history. There is that great proverb – “that until the lions have their own historians, the history of the hunt will always glorify the hunter." We have our own historians. We ask Bangladesh’s people and our historians to dim their lights in remembrance of him.

We honour the legacy of our founder Father, Bangabandhu Sheikh Mujibur Rahman, by leveraging the gifts of knowledge, compassion and creativity, to care for all – every day. We witnessed an extraordinary bravery and patriotism in him. It doesn’t just tell time. It tells history. He was truly an outstanding political figure who served as a role model for his people, as well as the oppressed people of the Third World, with his love, patriotism, spirit, and dedication. His energy and enthusiasm permeates the political arena, and his dedication to the oppressed is unmatched. An almost sky-touching figure, he would not revisit this land but his supreme sacrifice, love, patriotism and courage to stand up against the unjust causes will remain immortal as inspiration in our collective memories. We bow our heads to commemorate him; and it is something for us to do, generation after generation. People have placed Mujib at this position, place, and time in our history. In teary eyes, we remember those memories in order that those last a lifetime. When we bring back knowledge from memory on this great son of this land, we wish to emotionally remember him in the language of Abraham Lincoln, "Every man is said to have his peculiar ambition. Whether it be true or not, I can say for one that I have no other so great as that of being truly esteemed of my fellow men, by rendering myself worthy of their esteem." Today, we must read him to a great extent and tell our people as history. Before I go, I better clear up one thing…"Let Mujib be! And all is light.” Joy Bangla. Joy Bangabandhu. My Golden Bangladesh, I love you.

The writer is a senior citizen, writes on politics, political and human-centred figures, current and international affairs.