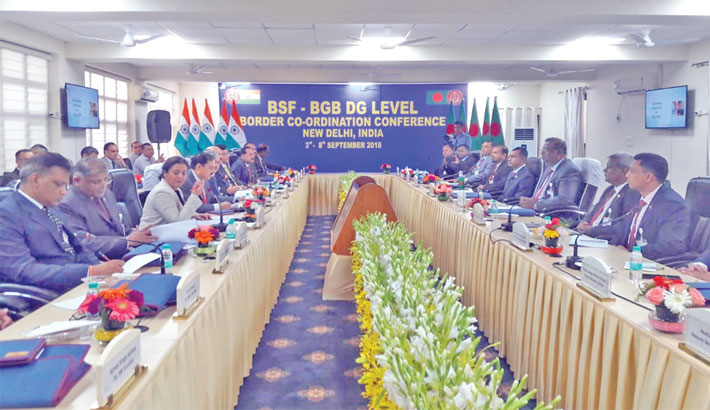 Participants at the 47th director general (DG) level conference between BGB and BSF at the BSF Camp Chhawla in New Delhi, India on Monday. – SUN PHOTO

The meeting is aimed at increasing bilateral cooperation in checking trans-border crimes such as smuggling of drugs and narcotics, cattle lifting and gun running across the international border between the two countries.

The meeting is scheduled to discuss the incidents of firing at unarmed Bangladesh citizens, shooting them to death along the borders, abduction or detention Bangladeshis, to stop smuggling arms, ammunition, and narcotic drugs, illegal trespassing of the border, for the viewers of joint retreat ceremony to build similar galleries on both sides of the border, to increase the area of ‘Crime Free Zone’ at the border, various steps to save the riverbank on the both side of the border and increase mutual trust of both the countries.

During the visit to India, BGB Director General Major General Md Shafeenul Islam will attend a courtesy meeting with Indian home minister and home secretary on the same day.