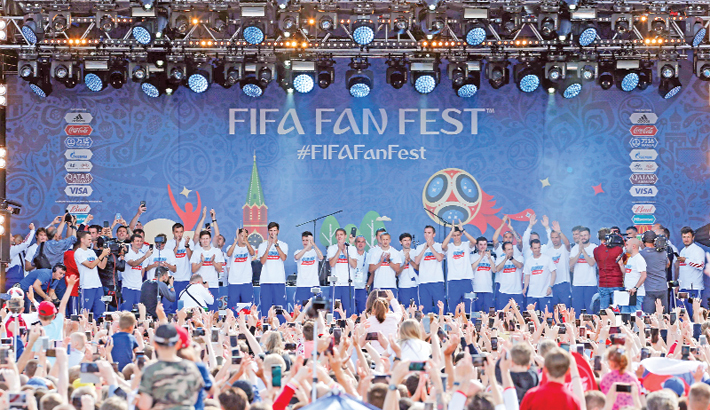 Russia football team players are greeted by fans during a visit at Moscow fan zone on Sunday. – AFP PHOTO

“One way or the other, he (the president) will find time to meet with the players of the national team as soon as possible,” Peskov said.

The Russian presidential spokesman also said that Putin already invited Head Coach Stanislav Cherchesov to take part in a session dedicated to the heritage of the FIFA World Cup in Russia.

“This event is scheduled to be held in the city of Kaliningrad on July 20 and it will be a joint session of the Council on the Development of Physical Culture and Sport with the Supervisory Board of the Local Organising Committee (LOC) Russia-2018,” Peskov added.

During the ongoing 2018 FIFA World Cup in Russia, the hosting national football team managed to make it to the quarterfinals stage, where Croatia edged them out on a penalty shootout to close Saturday’s spectacular match in Sochi.

Russia is staging its first-ever FIFA World Cup, which kicked off in Moscow with a remarkable opening show at Luzhniki Stadium on the evening of June 14.