Indian Air chief was present as the chief guest 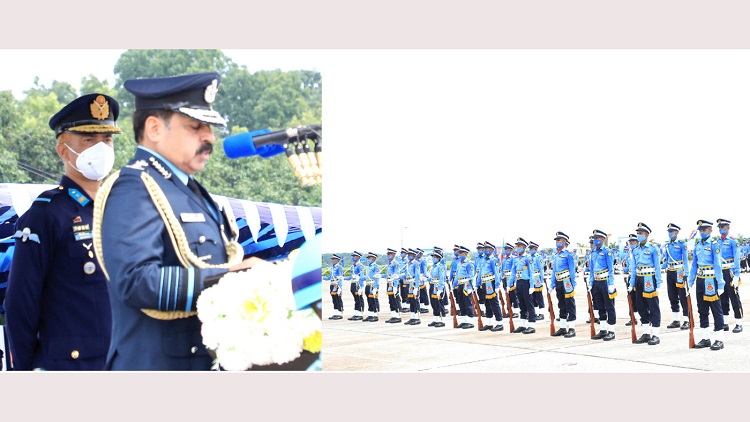 Respected Chief of Air Staff of Indian Air Force Air Chief Marshal Rakesh Kumar Singh Bhadauria attended the ceremony as Chief Guest, reviewed the smartly turned-out parade and took salute at the impressive march past, and handed over trophy, certificates and flying badges among the cadets.

On the occasion, the Chief Guest began his speech showing his deep respect to Bangabandhu Sheikh Mujibur Rahman, the greatest Bengali of all time, who dreamed of a modern Air Force.

He said that history bears the signature of the friendship between Bangladesh and India. “Kilo Flight” was born on 28 September 1971 on Indian soil and today it has become a modern three-dimensional Air Force.

After that, he paid deep homage to the sacrifices of the heroic freedom fighters in the glorious independent war of Bangladesh.

He lauded the participation of the Bangladesh Air Force members in the ‘Republic Day Parade’ of India on 26 January 2021 as a sign of bright social and economic relations between Bangladesh and India. He further said that the schools and colleges including the “Bangabandhu Sheikh Mujibur Rahman Aviation and Aerospace University” running by Bangladesh Air Force continue to make outstanding contributions in the field of education.

He highly appreciated the contribution of the Bangladesh Air Force in maintaining world peace and also for maintaining law and order inside the country.

The Air Force Academy's state-of-the-art training, due to which cadets from different countries are undergoing training at the academy, continuous contemporary activities and development initiatives even in Covid-19 situation are exemplary, he mentioned.

Officer Cadet Academy Under Officer Mirza Hammad Bin Shihab commanded the parade. The parade was followed by a spectacular fly past by different aircraft of Bangladesh Air Force.

Among others, high civil and military officials, local dignitaries and guardians of the newly commissioned officers were present on the occasion.