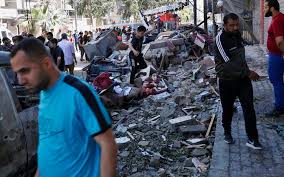 At least 227 people, including 64 minors, have been killed and 1,620 more wounded in Israeli strikes pounding the Gaza Strip since May 10, the coastal enclave’s Health Ministry said on Wednesday.

"As many as 227 people have been killed, including 64 underage children, 38 women and 17 senior citizens, while another 1,620 have received wounds varying in severity in Israel’s bombardments," the Al-Quds online daily reported quoting the ministry as saying.

The Palestinian radical groups located in the Gaza Strip and the Israeli army have been exchanging strikes since May 10. The escalation was sparked by the clashes at Al Aqsa Mosque in East Jerusalem in early May, after the Israeli court had ruled to evict Arab families from their homes in the Sheikh Jarrah neighborhood. Palestinian militants have fired more than 3,500 rockets into Israel, in response the Israeli army have bombed hundreds of targets in the enclave.

Additionally, clashes between Palestinians and Israeli police are ongoing in the West Bank. As a result, at least 27 people, including four children, are reported to have been killed and about 6,200 more Arabs injured.

At least 12 Israelis have been killed so far in the strikes conducted on Israeli cities from the Gaza Strip.