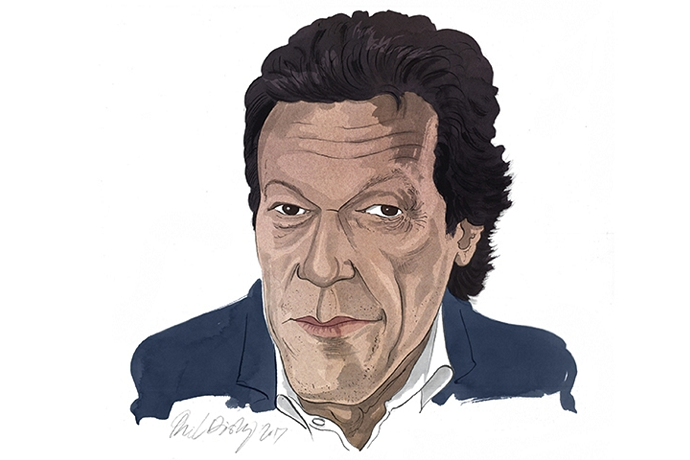 Imran Khan appears to want to impose Islamic blasphemy laws across the world. ‘I want the Muslim countries to devise a joint line of action over the blasphemy issue with a warning of trade boycott of countries where such incidents will happen,’ Khan said in an address on Monday. Last week, talking up his plan to launch a global movement, and his love for Islam’s prophet, Khan warned, ‘There will come a time when people in the West as well will be scared of blaspheming against our prophet (peace be upon him)’.

The Pakistani premier’s rejuvenated bid to outlaw blasphemy against Islam came after he succumbed to the demands of proscribed radical Islamist group, Tehrik-e-Labbaik Pakistan (TLP), which Khan’s own government had banned. The TLP orchestrated violent protests earlier this month demanding the expulsion of the French ambassador and a boycott of French goods, after Charlie Hebdo republished its Muhammad cartoons in September.

While Khan has reminded the TLP of the economic consequences of rushing to move against France, he has also reassured the group – which outlawed as a terrorist organisation only a fortnight ago, and which has advocated dropping a nuclear bomb on France – that he shares the ‘same goals’ as them. This was showcased last week, when Khan’s government presented a resolution in Parliament to expel the French ambassador. But given the hundreds of millions worth of aid France gives to Pakistan, and the billions worth of trade and aid the country gets from the EU, it is not surprising that he has avoided implementing a trade ban as a way of exporting Pakistan’s murderous blasphemy laws.

Pakistan is one of 12 Muslim countries where blasphemy is still punishable by death. These blasphemy codes emanate from Islamic sharia, and are unlike blasphemy laws in other parts of the world, which either tend to be largely redundant or apply to all religions. Hundreds have been on death row in Pakistan for ‘committing blasphemy’ by teaching certain ideas at universities, liking a post on Facebook, or drinking water from a Muslim’s glass. And at least 77 people have been extrajudicially killed since the country Islamised its blasphemy codes to elevate Islam above other religions.

Earlier this month, two Christian nurses were charged with blasphemy for removing a sticker with an Islamic inscription on it in a Faisalabad hospital ward. Last month’s Aurat [Women’s] March in Pakistan has been accused of blasphemy for demanding human rights for women. Pakistan’s tally of blasphemy cases in 2020 included a football manufacturer and a three-year old.

Last year also saw a Muslim woman from the constitutionally excommunicated Ahmadiyya sect being arrested for blasphemy after giving charity to a mosque, and an Ahmadi man shot dead in a courtroom during his blasphemy trial. Ahmadi killings, and state backed demolition of their mosques, has continued in 2021, with the likes of the TLP, along with the Pakistan government’s advisory Council of Islamic Ideology, demanding that the Ahmadiyya sect be collectively declared as blasphemers and apostates.

Indeed, while Khan vociferously clamours against western ‘Islamophobia’, Pakistan conducts its own gory ‘Islamophobia’ against Ahmadiyya and Shia Islam. Elsewhere blasphemy against Hinduism is ubiquitous in Pakistan, with Khan’s own ministers openly mocking Hindu deities. Around 1,000 Hindu and Christian girls, mostly underage, are forcibly converted to Islam in Pakistan each year.

And yet, instead of addressing the plight of those he was elected to represent, Khan is more interested in fighting ‘Islamophobia’ elsewhere. In this quest, he recently co-founded an ‘anti-Islamophobia TV channel’ in 2019, along with Mahathir Mohamad – who believes Muslims have a right to ‘kill millions of French’ – and Recep Tayyip Erdogan.

Imran Khan understands that he is playing a dangerous game by exporting Islamic blasphemy laws and making threats to the West. He was forced to swiftly apologised when accused of blasphemy in 2017 for narrating a tale of Muhammad with insufficient reverence. And when talking to global audiences in the past, Khan has confessed that when living in Pakistan there is a fear associated with talking about ‘anything perceived to be sacrilegious.’

It is the same fear that he now wants to instil in the West.