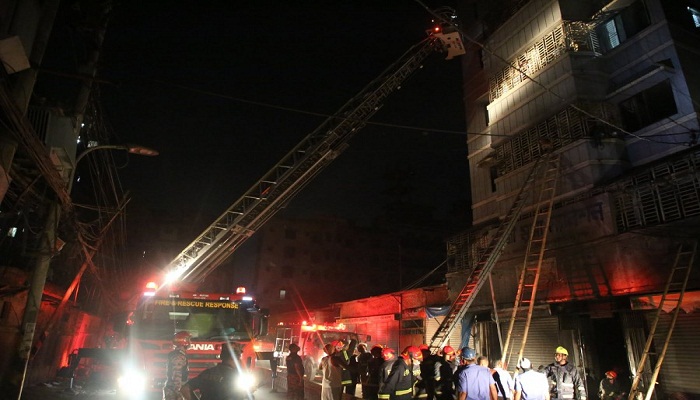 The death toll from the massive fire that broke out at a building in Armanitola area of Old Dhaka in the early hours of Friday, climbed to five as another victim succumbed to burn injuries on Sunday.

The deceased was identified as Shafayet, 28.

Dr Partha Shankar Paal, resident medical officer of Sheikh Hasina National Institute of Burn And Plastic Surgery, said Shafayet, who has been kept on life support, breathed his last around 8:30 am.

Four victims are now undergoing at the ICU of the hospital while the others are being treated at Post Operative Ward, he said.

Earlier, four people were killed and 35 others sustained burn injuries after a massive fire broke out at the six-storey building in the Armanitola area of Old Dhaka early Friday.

Officials said the fire broke out at Hazi Musa Mansion in Armanitola and soon spread to other portions of the building. And it took 19 fire tenders nearly three hours to douse the flames.

Initially, two bodies were recovered by the firefighters but later two more were pulled out from a small room near the stairs of the building, officials said.